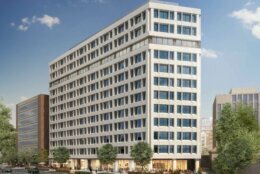 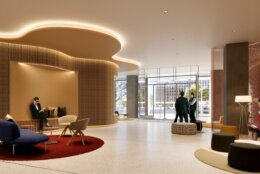 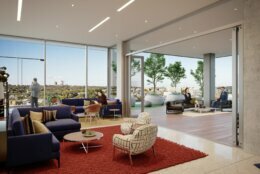 The American Bankers Association (ABA) is moving its headquarters to a newly renovated office building on Dupont Circle in the District — one of two big leases for 1333 New Hampshire Ave. NW.

The nonprofit Patent-Centered Outcomes Research Institute, which funds clinical research, is also relocating to the building.

Both are large leases. The ABA is leasing more than 87,000 square feet across three floors, and will relocate from its current headquarters about four blocks away at 1120 Connecticut Avenue, NW. It won’t move until November of 2022.

PCORI is leasing 96,000 square feet across three-and-a-half floors, moving from 1828 L Street, NW, and consolidating several other locations. It will relocate in Spring of 2022.

Combined, the two are leasing more than half of the 12-story building, owned by Bethesda, Maryland-based The Meridian Group, and bringing the building to 73% leased. The building is currently in the final stages of its major renovation.

Among upgrades Meridian has made to the building are a rooftop conference and entertainment space and an outdoor terrace with 360-degree views.

Those office workers will also have a fun diversion in their building: Swingers, a mini-golf and bar for adults, opens there later this month in space formerly occupied by Front Page restaurant and Buffalo Billiards, both of which closed in 2019 after failing to negotiate new leases.

Meridian and WeWork Property Investors bought the building in 2018 for $136.5 million from Boston Properties.