Redevelopment of Innovation Station in Va. will be one of the largest projects in DC area

A group of developers will seek approval next week for the first phase of a development that will straddle the Loudoun-Fairfax county line in what would be one of the biggest projects in the D.C. region.
Listen now to WTOP News WTOP.com | Alexa | Google Home | WTOP App | 103.5 FM
(1/3) 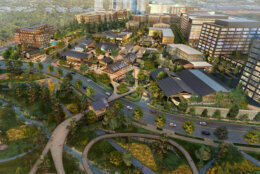 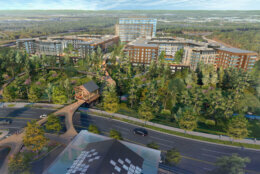 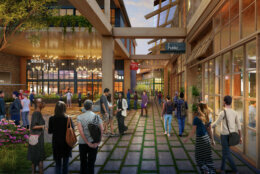 A group of developers will seek approval next week for the first phase of a development that will straddle the Loudoun-Fairfax county line in what would be one of the biggest projects in the D.C. region.

The developers are seeking approval from Loudoun County.

The name Rivana is a nod to the Rivanna River, which runs from Charlottesville to Shenandoah National Park, and was Virginia’s first governmentally-designated scenic river.

Much of the land being developed is undeveloped Virginia countryside, some of which will be incorporated into the Rivana development. Developers use the word “bucolic” in marketing materials.

The initial phase will include 1.8 million square feet of mixed-use development, including 250,000 square feet of office space, and almost 2,000 apartments expected to be completed in 2024 and 2025.

Also planned is a hotel, a network of public spaces and an 11-acre park, as well as restaurants and retail in a 185,000-square-foot “retail village.”

The final stages of the development are expected to complete in 2027.

With its Metro access, it is being designed as a highly walkable community. Other future amenities planned include a performing arts venue, an outdoor amphitheater and the region’s largest farmers market.

Origami Capital Partners and Timberline Real Estate Partners, two of the developers on the project, acquired the Center for Innovative Technology campus last year, which is part of the Rivana redevelopment footprint area.

Other developers include Open Realty Advisors, Rebees and the Hannover Company.

Pending approval, groundbreaking on the first phase of the project is set for the first quarter of 2022.

“Unlike other developments on the East Coast, the vision for Rivana at Innovation Station is more than square feet and total units,” said Loudoun Economic Development Executive Director Buddy Rizer. “It’s a chance to deliver a more humanized environment that reflects who Loudoun is now and where we are going.”

The total development site is more than 100 acres.

Rivana fits in with Loudoun County’s 2019 Comprehensive Plan, which calls for creating walkable, urban environments around Silver Line Metro stations. It will also be marketed as attractive to big name corporate tenants, because of its proximity to Dulles Airport and high visibility from the Dulles Toll Road.