After falling throughout 2020, average apartment rents in the D.C. area have risen for four straight months, though they remain well below year-ago levels.

In the past month alone, average apartment rents in the District have risen by 1.4%. The median rent in the District now stands at $1,633 a month, according to rental listing site Apartment List. That is 10.5% lower than it was a year ago, but it is higher than the national average of $1,137 per month.

Apartment List says that, compared to most other large cities, D.C. is less affordable for renters.

Of the 10 top apartment markets in the D.C. metro tracked by Apartment List, average rents are lower than a year ago in six of them.

Arlington County, Virginia, remains the most expensive apartment rental market, with an average monthly rent of $2,144. Arlington County rents are still 9.7% lower than a year ago, but rents have bounced back the most, rising by 2.7% over the past month.

While the D.C. region’s rents remain mostly lower than a year ago, several other big cities have recovered from last year’s pandemic declines, with average rents in Atlanta up 3% year-over-year, up 2.1% in Miami and up 1.5% in Austin, Texas.

Apartment List calculates average rents across the country using both U.S. census data and its own listing data. Its full report of apartment rental changes in April of this year, and year-over-year changes for the largest metro areas, can be found online.

Below are median one-bedroom and one-bedroom rents in the D.C. region, along with monthly and year-over-year changes, courtesy Apartment List. 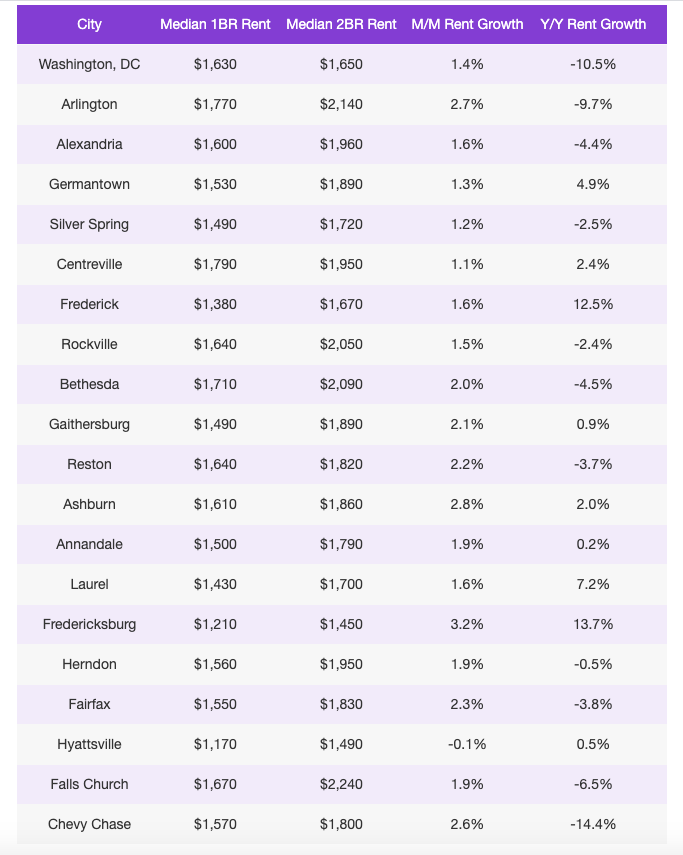