As home values continued to rise throughout 2020, gains in the D.C. region outpaced many other large metros — and as a result, the D.C. metro is now the fourth most valuable residential market in the nation.

Zillow reports the D.C. metro housing market gained $75 billion in value throughout 2020. All homes in the region now have a combined value of $978 billion. That puts the D.C. area behind only New York, Los Angeles and San Francisco, despite the D.C. area ranking as the seventh-largest metro.

Over the past 10 years, the total value of residential real estate in the Washington metro has grown by $334 billion.

The dollar value numbers include all owned, rented or vacant housing units, but not apartment buildings with five or more units, which are considered commercial real estate properties.

By state, Virginia ranks No. 10 at just over $1 trillion.

California homes make up more than one-fifth of the county’s total housing value, at $7.8 trillion, making all residential property in California worth more than homes in the next three most valuable states combined.

California has almost half of the 10 most valuable metro areas.

By metro area, New York City is the most valuable, at $3.1 trillion, though Zillow says its lead over Los Angeles, whose total residential value climbed to $2.8 trillion last year, is shrinking.

The full U.S. housing stock gained $2.5 trillion in value last year, most of that from appreciation of existing homes. That is the strongest single-year gain than in any other year since 2005.

“2020 was a record-breaking year for the housing market with intense competition among buyers driving up home prices,” said Zillow economist Treh Manhertz.

“Builder confidence, perhaps in reaction to the boosted demand, hit record high and more homes are being built as a result. Add that together and you can see why the housing market gained more than any other year since the Great Recession.”

Alaska was the only state where total residential values fell last year, down 1.8%, or about $1.5 billion.

Below are the sates with the most valuable housing markets in 2020, courtesy of Zillow. 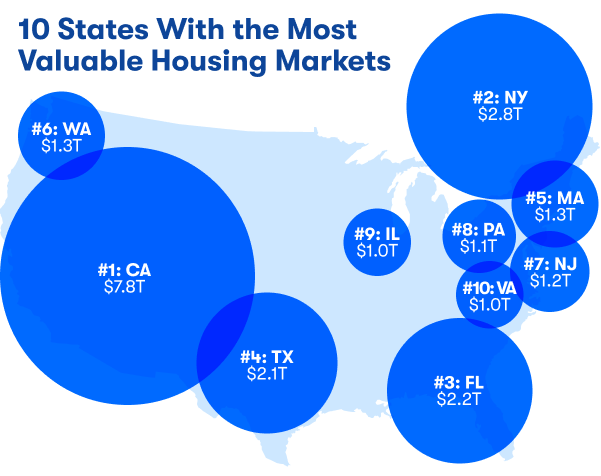