DC-area apartment rents are down, but you might have to ask

The pandemic has fueled a rise in apartment vacancies in the D.C. metro’s urban core, and in large cities across the country, with young renters doubling up or moving back home, and others downsizing to more affordable housing or moving farther out to more affordable areas, and rising vacancies have translated into falling rental rates.

The drop has been significant.

Rental database and search site Apartment List ranks both the District and Arlington County, Virginia, among the 10 rental markets in the nation where rents have fallen the most.

The median rent for a two-bedroom apartment in the District is currently $1,570 a month, down 14.4% from a year ago, and 15.3% since March, according to Apartment List. That ranks D.C. No. 5 on the list of biggest drops.

“D.C., Northern Virginia and the greater D.C. metro area generally has for a long time been one of the most expensive rental markets in the country. Right now, we’ve got a lot of folks who are facing new financial hardships as a result of the pandemic. A lot of folks are just unable to afford these sky-high rents, and we’re really seeing a sharp drop-off in demand,” said Chris Salviati, housing economist at Apartment List.

That is good news for renters signing a brand new lease. But that does not necessarily help renters whose current, yearlong leases may soon be up for renewal. The landlord is not likely to automatically lower rent on a lease renewal.

“I would imagine in most cases, probably not automatically. But I do think a lot of landlords are willing to negotiate right now. The best thing you can do, I think, is to be informed about what is happening in the market and discuss that with your landlord, but it is probably not something that is going to happen automatically,” Salviati said.

The farther away from city centers, the less rents have declined. For example, the median rent in Gaithersburg, Maryland, is down just 0.6%. The year-over-year decline in Centreville, Virginia, is down 4%. In Germantown, Maryland, the median rent — at $1,490 a month — is actually 2.1% higher than a year ago.

Apartment List believes the sharp decline in rental rates here and nationwide will slow this year.

Below is a list of D.C. area median one-bedroom and two-bedroom monthly rents, and month-over-month and year-over-year comparisons, courtesy of Apartment List: 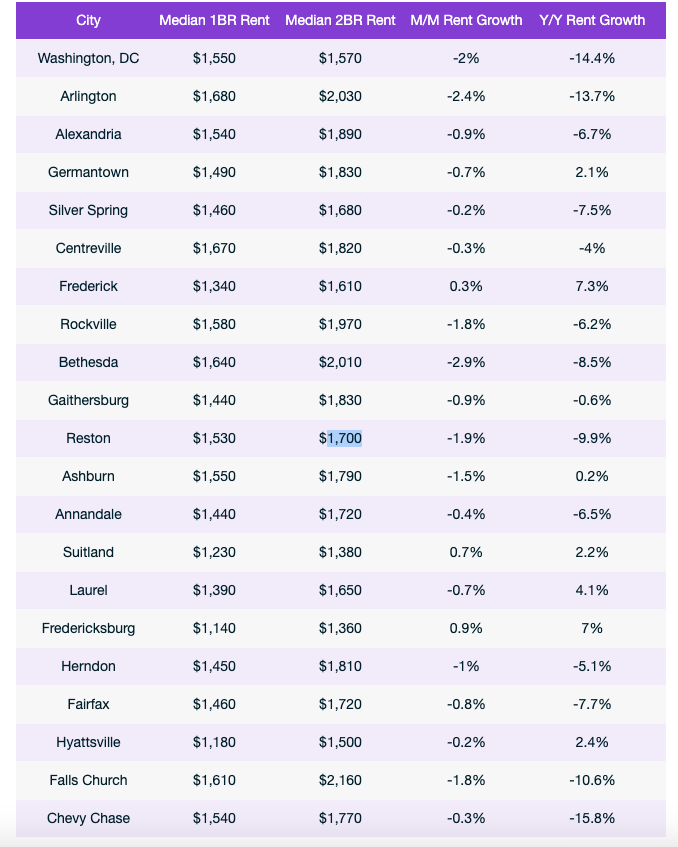