The D.C. area housing market has not seen the traditional lull in activity that generally comes with fall. Homes are selling at a record pace and, in many areas, at record prices. That includes Northern Virginia.

The region represented by the Northern Virginia Association of Realtors, which includes Fairfax and Arlington counties, the cities of Alexandria, Fairfax and Falls Church and the towns of Vienna, Herndon and Clifton, reported nearly $1.5 billion in residential real estate sales in September, a 58% increase over last September, with 2,166 homes sold last month.

“This is truly a staggering sales volume for one month and speaks to the favorable market conditions in Northern Virginia,” said Nicholas Lagos, president of the Northern Virginia Association of Realtors.

Every jurisdiction in the NVAR’s footprint showed an increase in the average sold prices of homes.

The number of active listings in the NVAR region at the end of September was down 5.6% from a year ago, but an encouraging sign for potential buyers is that new listings rose by 30%, with more than 3,000 homes coming on the market in September.

NVAR predicts the pace of sales will slow slightly in the coming months with more listings on the market.

“This is particularly true in the upper end of the market for single-family homes over $2 million and condos priced above $1 million, where inventory has entered a more balanced, or possibly even buyer’s market,” said Derrick Swaak, the 2020 NVAR president-elect.

A separate report this week by listing service Bright MLS said the median price of a home that sold throughout the entire Washington region in September was $512,000, an 18.8% year-over-year increase.

Homes that sold region-wide went under contract in an average of seven days — a record — and the number of sold homes coming off the market in 10 days or fewer more than doubled from a year ago. 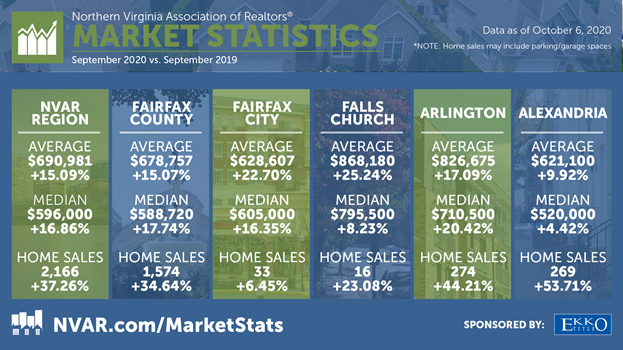