The number of flights and the number of passengers on them remain well below year-ago levels, and the D.C. region ranks among the most impacted by the decline.
Listen now to WTOP News WTOP.com | Alexa | Google Home | WTOP App | 103.5 FM

The number of flights and the number of passengers on them remain well below year-ago levels, and the D.C. region ranks among the most impacted by the decline.

Trade group Airlines for America reported that the number of scheduled flights at U.S. airports nationally in July was down 50% from a year ago. At the D.C. area’s two airports — Dulles and Reagan National — combined, scheduled flights were down 60%.

New York remains most impacted, with scheduled flights down 70%.

Airlines for America has ranked states by the drop in flights and passenger traffic, but for the purpose of its report, includes D.C. by assigning Dulles and Reagan National to its numbers.

D.C.-area airports also rank No. 3 for the decline in TSA passenger screenings, down 83% in July, compared to a year ago. New York and Hawaii top that list, down 86% and 85%, respectively.

TSA screenings have been rising nationally since hitting a pandemic low on April 14, when just 87,534 passengers flew through U.S. airports. The highest day since the COVID-19 pandemic began so far was Aug. 9, when TSA screened 831,789 passengers. That compared to the same weekday a year ago, when TSA screenings totaled more than 2.6 million.

Airline travel took three years to recover after 9/11 and more than seven years to recover from the global financial crisis in 2008, according to Airlines for America, though the steep declines were not as dramatic as now.

Below is a chart showing change in scheduled departures by state, from Airlines for America: 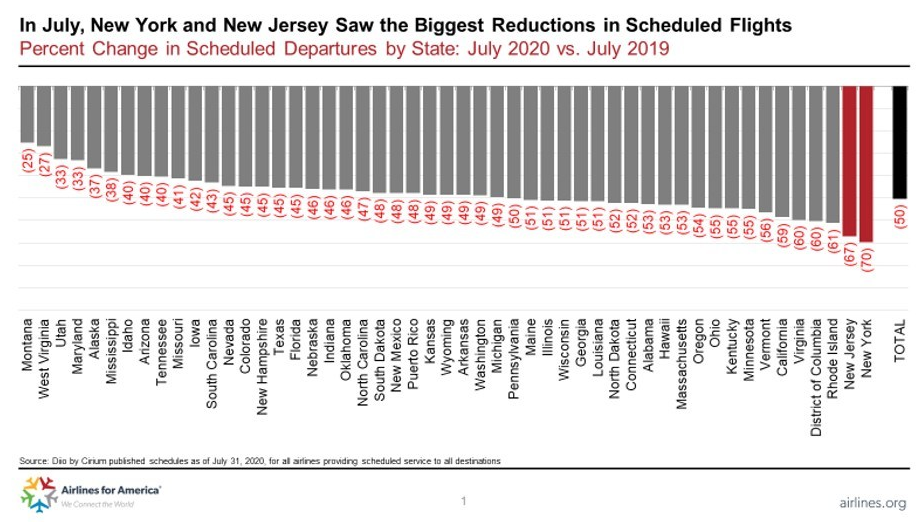