There is no question that liquor stores throughout the D.C. region are doing a banner business right now, and sales numbers just released by the Virginia Alcoholic Beverage Control Authority show sales last week were up 59% from a year ago to $30.1 million.

The biggest jump was at Virginia’s ABC stores in Northern Virginia, where sales spiked 65% to $11.2 million, more than a third of all liquor sales at Virginia ABC stores.

Almost all of the business was with retail customers, as licensee sales dry up.

Bars and restaurants usually account for as much as 18% of ABC sales, but that fell to 2.5% last week.

Below is a breakdown of Virginia ABC store sales by state region: 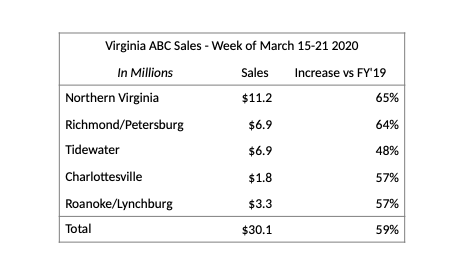