ProPublica is a Pulitzer Prize-winning nonprofit investigative newsroom based in New York.

This week, we reported on how TurboTax uses deceptive design and misleading advertising to trick lower-income Americans into paying to file their taxes, even though they are eligible to do it for free.

There’s a new wrinkle: It turns out, Intuit, the maker of TurboTax, is deliberately hiding the truly free edition — TurboTax Free File — from Google Search.

Intuit has done that by adding code on its site telling Google and other search engines not to list TurboTax Free File in search results.

The code in question, which can be found in a file called robots.txt or in an HTML tag, has to be actively added to a site, as Intuit has done. It is typically used on pages that designers want to hide from the open internet, such as those that are for internal use only. Without that code, Google and other search engines default to adding a site to their search results.

“Robots.txt is a big ‘No, don’t go any further’ sign on the web,” Spool said.

The code on TurboTax’s Free File site says “noindex,nofollow” — instructions for it not to show up in search results.

In contrast, the TurboTax page that puts many users on track to pay signals to Google that it should be listed in search results.

Sen. Ron Wyden, the ranking Democratic member of the Senate Finance Committee, said in a statement that he plans to raise Intuit’s misleading marketing with the IRS. “Intuit’s tactics to reduce access to the Free File program and confuse taxpayers are outrageous,” he said. 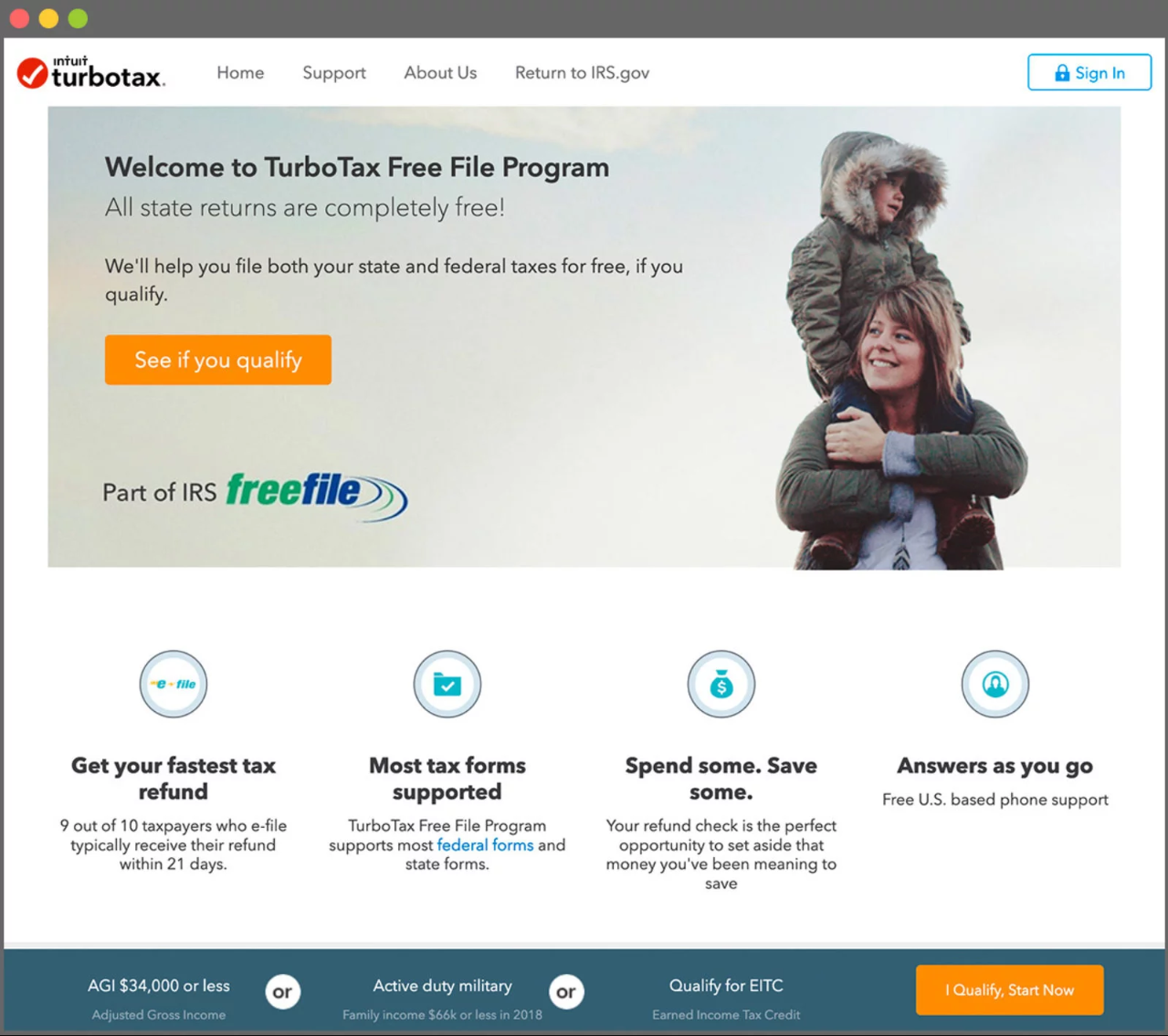 And here’s the code Intuit put in hiding it. (Special thanks to Larissa Williams on Twitter and Arkadiy Kulev on Reddit for pointing out the code.)

And here’s the main TurboTax.com page, which, despite the “FREE Guaranteed” language, puts many users on track to pay. 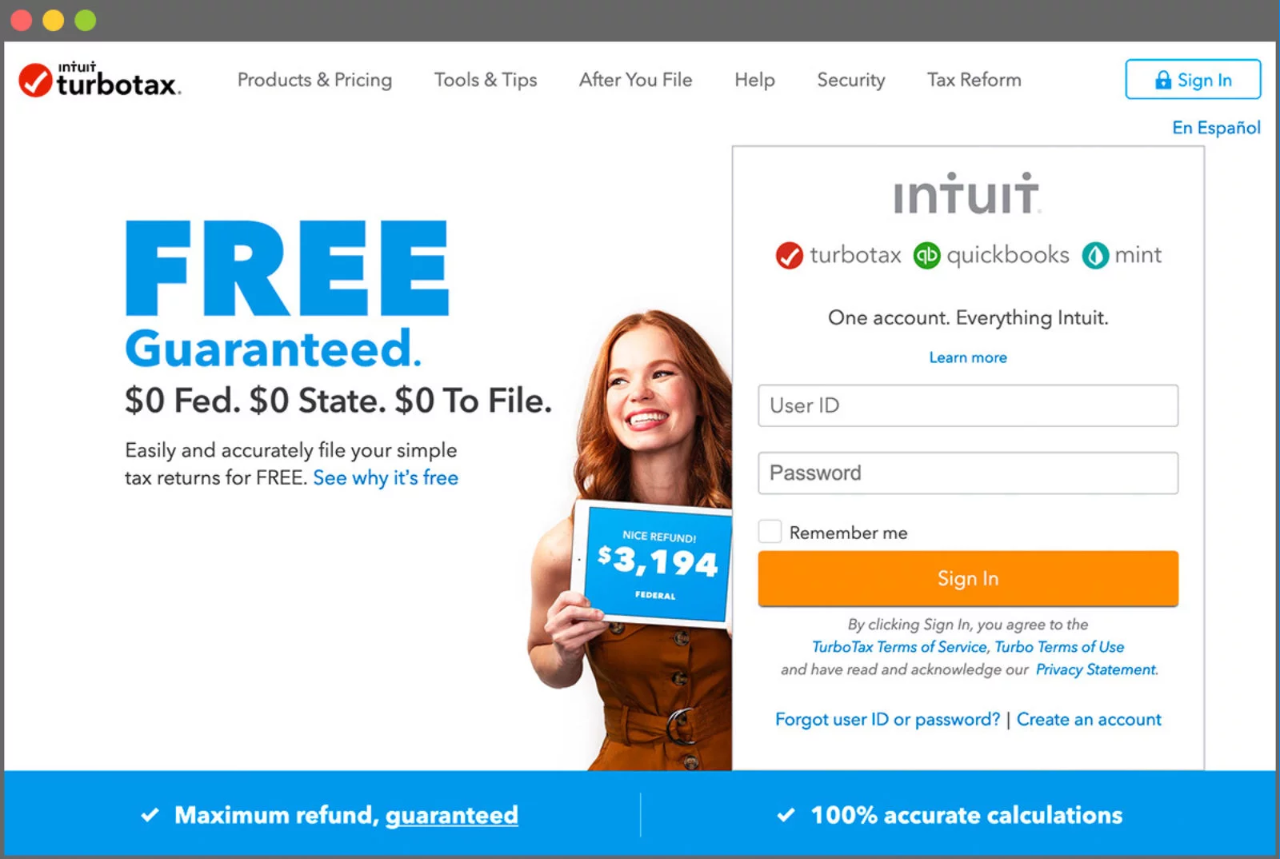 It instructs Google and other search engines to “index,follow.”

An Intuit spokesman didn’t immediately respond to requests for comment.

In exchange for the IRS promising not to create its own free, online filing tool, Intuit, H&R Block and other companies signed a deal to offer Free File options to lower-income Americans.

The fact that TurboTax Free File is effectively hidden from Google could contribute to the low rate of use. While 70% of taxpayers are eligible for Free File options from TurboTax and other tax software products, just 3% of eligible taxpayers or fewer use them each year.

Under the Free File deal, Intuit and other companies pledged to work “to increase electronic filing of tax returns, which includes extending the benefits of online federal tax preparation and electronic filing to economically disadvantaged and underserved populations at no cost.”

Intuit is the dominant player in consumer tax software, with market share reportedly in the 60% range.

We found that Intuit’s smaller competitor in the market, H&R Block, also hid its H&R Block Free File product from Google using the same sort of code. An H&R Block spokeswoman said: “We are proud that we have helped millions of Americans file their returns under the Free File Alliance program. … Our Free File Alliance offering, like all other alliance partners, is presented in the IRS site and easily reachable through the IRS, on HRBlock.com, and also by googling ‘FFA H&R Block.’”

But the Google results for that search do not directly link to H&R Block’s Free File landing page.

The Senate is currently considering a wide-ranging, bipartisan bill, the Taxpayer First Act, that would make the tax software industry’s Free File deal with the IRS permanent. Intuit and other tax software companies have long lobbied for the language in the bill.

Wyden, who is a co-sponsor of the Taxpayer First Act, said Intuit’s actions have undermined the program. “The IRS agreement with the tax-preparation software industry requires companies to work to increase the number of taxpayers who file their taxes for free,” he said. “Steering eligible taxpayers away from filing for free or blocking the Free File page from search results violates the spirit of the agreement and calls into serious question the justification for the program.”

The Senate is currently in recess, and the fate of the Free File provision in the Taxpayer First Act is unclear. Spokespeople for three of the bill’s other sponsors, Sen. Charles Grassley and Reps. John Lewis and Mike Kelly, didn’t immediately respond to requests for comment.

An IRS spokesman declined to comment on Intuit but said in a statement, “Free File has been a successful program and partnership that’s benefited millions of taxpayers. The IRS.gov/freefile page is promoted by the IRS as the only site where taxpayers can view all free offerings from the software providers.”

The IRS was criticized by its expert advisory council last year for “deficient oversight” of the Free File program.

Dozens of ProPublica readers whom TurboTax charged even though they were eligible to file for free have reported getting refunds by calling the company.