WASHINGTON — If you’re a social media holdout, you are an increasingly rare breed.

D.C.-based business news and how-to website The Manifest says 86 percent of Americans now use social media every day. Women are more likely than men to check in repeatedly throughout the day.

“This is definitely generally speaking and it is not true for all women or all men, but women tend to be more communicative in general, so it makes sense that they are on social media more often,” Kristen Herhold at The Manifest told WTOP.

“I know for me, I am always checking Instagram to see what my friends are up to, versus my boyfriend who goes on social media much less often, and it comes down to I have a lot more friends who are posting more often so there is more for me to see,” she said.

Nearly two-thirds of social media consumers report they are using YouTube and Instagram more this year than they were last year, compared to 52 percent of Facebook users who said so.

“Facebook is still the giant, but that is starting to change, especially with the teenagers. They are not using Facebook as often. So as they become more prominent consumers, Facebook’s status as the most popular will probably change,” Herhold said. 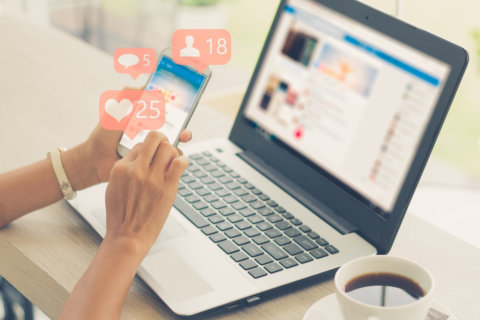