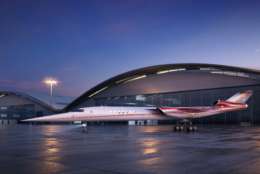 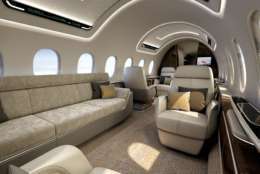 WASHINGTON — Bethesda-based Lockheed Martin Corporation has signed a memorandum of understanding with Las Vegas-based Aerion Corporation that could bring a supersonic business jet Aerion has been developing to market within seven years.

Aerion has developed advanced aerodynamics and structural designs of its AS2 through a previous engineering collaboration agreement with Airbus. That led to Aerion’s preliminary wing and airframe designs, systems layout and preliminary fly-by-wire flight control system for the AS2.

Under the one-year Lockheed partnership, the two will develop a framework for further development of the AS2, including engineering, certification and production.

“Following our initial review of Aerion’s aerodynamic technology, our conclusion is that the Aerion AS2 concept warrants the further investment of our time and resources,” said Orlando Carvalho, executive vice president of Lockheed Martin Aerodynamics.

Separately, Bloomberg News reported Friday that Aerion would sell up to $200 million in debt to fund the jet’s design phase.

Earlier this year, Aerion signed an agreement with GE Aviation for a supersonic engine for the AS2.

The 12-passenger AS2 is expected to have a maximum over water speed of Mach 1.4 and 1.2 over land without a sonic boom reaching the ground.  It would reduce trans-Atlantic trips by as much as three hours.

Aerion already has interest in the supersonic business jet. Two years ago, fractional fleet operator Flexjet placed an order for 20 of them.