Coronavirus News: Fairfax Co. votes to increase substitute teacher pay | Is it time to get a COVID-19 booster? Which one? | Local cases of COVID-19 | How many in DC region are vaccinated?
Home » Business & Finance » APT’s 'egalitarian' Ballston headquarters

Applied Predictive Technologies gave all of the offices with views to nonexecutives, saying its "egalitarian design" is a reflection of its purely flat culture.
Listen now to WTOP News WTOP.com | Alexa | Google Home | WTOP App | 103.5 FM
(1/4) 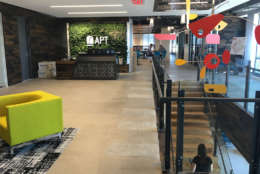 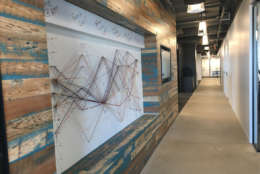 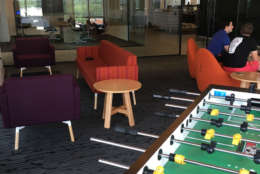 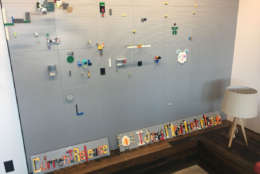 WASHINGTON — Arlington, Virginia-based analytics software and consulting company Applied Predictive Technologies has moved to its new Ballston headquarters and the CEO’s office has no view.

APT, acquired by MasterCard for $600 million in 2015, recently relocated to a larger Ballston headquarters at 4250 N. Fairfax Drive after receiving $1.75 million in incentives from Virginia’s Commonwealth Opportunity Fund, and will create about 350 new jobs as part of its expansion.

APT had considered relocating to D.C. and North Carolina as well.

APT, whose software helps companies measure marketing and merchandising results, has Fortune 500 companies that include Wal-Mart, Starbucks and Coca-Cola.

The company’s new headquarters has no corner offices. All executive offices are in the interior of the space, meaning the majority of nonexecutive employees have the views. And all private offices, including that of the chief executive officer, are the same size.

“This egalitarian design is a reflection of our purely flat culture,” APT said in a statement announcing its new headquarters.

The company occupies four floors of the building.

APT’s new headquarters also has the equivalent of an Apple store’s Genius Bar, called “Byte Bar” where employees can have IT issues resolved.

“We understand that millennials view work as an extension of their lives, and that the clearly defined boundaries between work and play are disappearing,” APT said.

“With that in mind, we have re-imagined the traditional office to include space for employees to refresh and recharge.”

All of the company’s 19 conference rooms are named after famous mathematicians.