The big German discount grocery chain will begin opening its first U.S. stores this summer, including locations in Virginia, ahead of schedule. Within a year of the first openings, the company plans to have 100 stores along the East Coast.

WASHINGTON — A big German discount grocery chain will begin opening its first U.S. stores this summer, including locations in Virginia, ahead of schedule.

Lidl (pronounced LEE-dul) established its North American headquarters in Crystal City in 2015 as a base for its U.S. expansion. It has also established distribution centers in Spotsylvania County, Virginia and Cecil County, Maryland.

Lidl still has not publicly disclosed its initial Virginia and Maryland stores, though a company spokesman confirmed the picture it distributed to the press Wednesday is of its prototype store in Fredericksburg, Virginia.

The Washington Business Journal has also reported initial locations in the Washington region will include Chantilly, Leesburg, Woodbridge and Bristow in Northern Virginia and College Park, Bowie and Suitland in Maryland. 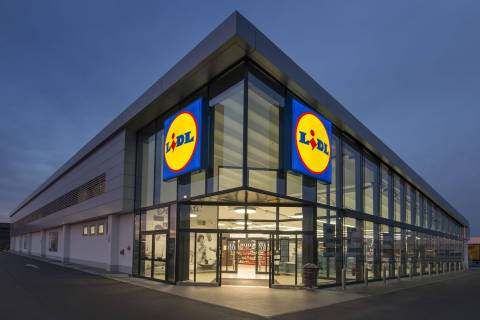