The developer of The Wharf project on the Southwest Waterfront, has released details of two additional apartment buildings that will open in 2017, including one that will be among the largest apartment structures in the District.
Listen now to WTOP News WTOP.com | Alexa | Google Home | WTOP App | 103.5 FM
(1/2) 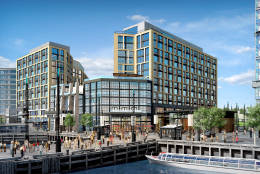 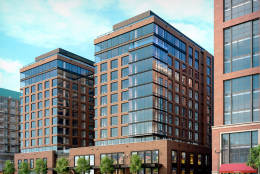 WASHINGTON — Hoffman-Madison Waterfront, the developer of The Wharf project on the Southwest Waterfront, has released details of two additional apartment buildings that will open in 2017.

The first, called The Channel, will include more than 500 apartments, ranging from micro-studios to two-bedroom units.

While amenity-rich apartment and condo projects have become the norm in the D.C. housing market, The Channel includes an impressive list such as a 1-acre outdoor green space on the building’s sixth floor with an infinity pool and cabanas overlooking the waterfront, a dog run, a community garden, bocce courts, a happy hour bar, a fitness center, library, lounge and party room.

The building also includes a 150,000-square-foot concert hall along with space for ground floor restaurants, bars and retail.

Preleasing starts in the spring for The Channel, although Hoffman-Madison has not yet released the range of rental rates for the building. The Channel is located at 950 Maine Avenue NW.

The second residential building, called Incanto, will include 148 apartments, a fitness center and lounge, courtyard and front desk concierge and on-site staff. Incanto is at 770 Maine Avenue SW, next to VIO, a 112-unit condominium building. Preleasing for Incanto also begins in the spring.

The $2 billion first phase of The Wharf development, a mile-long stretch of development along the Potomac River, includes a growing list of retail, residential and restaurants. The grand opening is planned for October 2017.