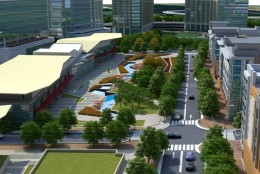 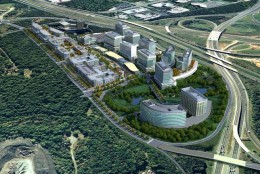 WASHINGTON — Investors are opening up 85 acres near Dulles Airport to developers, with plans for a $1 billion, mixed-use project along the Silver Line.

Chicago-based Origami Capital Partners and Westport, Connecticut-based Greenfield Partners have renamed the project from Dulles World Center to The Hub.

If developers sign on as planned, it will become a 24-hour, mixed-use gateway that will combine retail, entertainment, multifamily residential, office and hotel uses. It will be developed at the intersection of the Dulles Toll Road and Route 28, adjacent to the planned Innovation Center Metro station on the Silver Line.

“We envision taller buildings with spectacular architecture that will create an exciting environment of innovation, culture, community and activity,” said David Bennion, a representative for the owners.

When complete, The Hub could include up to a dozen restaurants as well as a significant entertainment venue.