A woman was killed, and two others were injured, including a child, when a car collided with a Maryland Transit Administration light rail train in downtown Baltimore Thursday morning.
Listen now to WTOP News WTOP.com | Alexa | Google Home | WTOP App | 103.5 FM
(1/2) 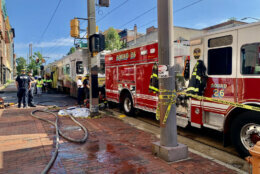 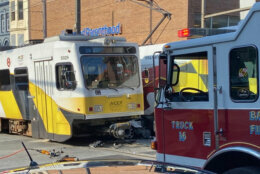 A woman was killed, and two others were injured, including a child, when a car became wedged between two Maryland Transit Administration light rail trains in downtown Baltimore Thursday morning, according to authorities.

Three people were inside the car, including the woman who was pronounced dead at the scene, Adams said. Firefighters had to work to free the car’s two other occupants, a 7-year-old child and a 30-year-old man. They were both taken to the hospital with injuries that were not believed to be life-threatening, the fire department said on Twitter.

Adams said medics also took one of the train’s operators to the hospital with minor injuries.

Rail service was stopped from North Avenue to Camden. Shuttle bus service is in place to route passengers around the scene of the crash, the MTA said.