Baltimore firefighters are on the scene of a major gas explosion that has killed one woman and leveled three houses.
Listen now to WTOP News WTOP.com | Alexa | Google Home | WTOP App | 103.5 FM

Baltimore firefighters are on the scene of a gas explosion that has killed one woman, seriously injured several othes and leveled three houses.

The Baltimore City Fire Department in an update Monday night said that seven people had been taken to the hospital after the explosion on Labyrinth Road, west of Reisterstown Road near Pikesville, just before 10 a.m.

Baltimore City Fire Department spokesperson Blair Adams said the exact cause of the blast, which happened just before 10 a.m. Monday, was under investigation, but called it “a major gas explosion.”

Four people were pulled from the wreckage during the morning, Adams said. She called the search a “labor-intensive operation.”

The fire department’s Roman Clark said firefighters were “basically using their hands and tools” to get through to anyone trapped inside. He called it a “horrendous-type situation.”

Linda Foy, of Baltimore Gas and Electric, said the utility is continuing to work to turn the gas main off in the area.

That will require cutting gas to people who haven’t been affected, but Foy said it was necessary since “certain parts of our gas system … we’re not able to get to” because of the rescue operation. She said there were electric problems in the area, as well.

Paul Carden, of the Red Cross, said they’ve established a reception center and are providing displaced people with food, water and air conditioning on MTA buses.

Neither Carden nor Adams could provide an exact number of how many people are displaced.

“It’s a disaster. It’s a mess. It’s unbelievable,” Diane Glover, who lives across the street, told The Associated Press. The explosion shattered her windows and blew open her front door, bending the frame. “I’m still shaken up,” she said hours later.

Footage posted to the crowdsourced safety app Citizen showed several townhomes with shattered windows and a downed transmission pole amid a mountain of rubble.

Aerial footage from WTOP’s news partners at NBC Washington appeared to show three buildings on Labyrinth Road had been entirely leveled, compared to satellite imagery of the area available on Google Maps.

UNBELIEVABLE: multiple homes have been LEVELED by an explosion in Northwest Baltimore, one person has died and multiple others still missing, possibly children #BREAKING #Chopper4 @nbcwashington #BaltimoreExplosion pic.twitter.com/6Bspu7ksES

BGE said in a statement that they got a call from the fire department just before 10 a.m.

“We are on the scene and working closely with the fire department to make the situation safe. Crews are working to turn off gas to the buildings in the immediate area. Once the gas is off, we can begin to safely assess the situation, including inspections of BGE equipment,” the utility said.

A building inspector who lives in the area told The Baltimore Sun he saw someone buried from the neck down and another sheltering in a closet. Kevin Matthews told the newspaper he could hear children shouting, “Come get us! We’re stuck!”

A man who identified himself as Dean has been credited with running toward the explosion, helping to rescue people before the police and fire departments got to the scene. “I didn’t even have shoes on,” he said, but he rushed to help.

He said he’d lived in Baltimore all his life, but he’d never seen anything like it: “I’ve been on a block with a gas explosion; it was nothing like that.”

Vircha Dehoney told WBAL-TV about the explosion, “I’m 60. Ain’t never heard nothing like that in my life.”

Pointing to where the houses were, she said it looked like they had never been there. “And they were there last night.”

“I just want to offer my prayers that everyone turns out safe,” said Baltimore Mayor Bernard C. “Jack” Young at the scene.

“What we need Baltimore to do is pray,” Council President Brandon Scott added. 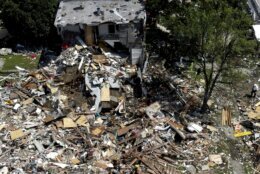 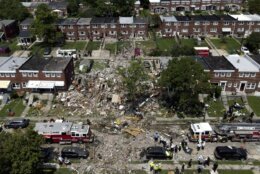 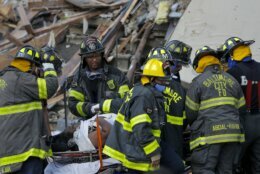 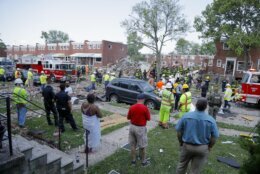 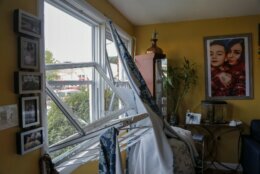 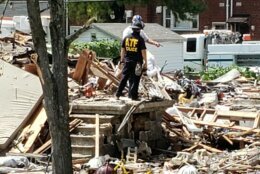 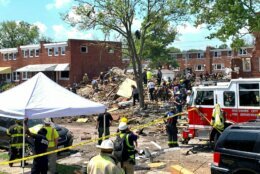 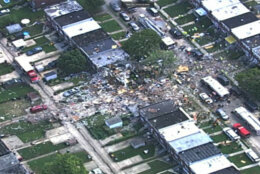 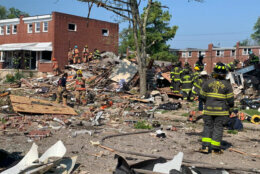 Maryland Gov. Larry Hogan said via Twitter, “We are closely monitoring the situation in northwest Baltimore following this morning’s horrific explosion. We have reached out to offer our full support to the ongoing response and recovery efforts, and are deeply grateful to the first responders on the scene.”

‘We thought a plane had crashed’

Barry Leventhal, whose warehouse equipment business is about 150 feet (46 meters) from the blast site, said he was in his warehouse when the explosion erupted and shook his building, damaging lights and a concrete wall.

Leventhal ran into an office to check on his son-in-law. Fortunately, none of the company’s 10 employees was injured.

“We thought a plane crashed or something. We couldn’t figure it out,” said Leventhal, the owner of Everything Warehouse.

BGE asked the Maryland Public Service Commission to approve a new gas system infrastructure and a cost recovery mechanism in late 2017 to pay for upgrades.

“Founded in 1816, BGE is the oldest gas distribution company in the nation. Like many older gas systems, a larger portion of its gas main and services infrastructure consists of cast iron and bare steel – materials that are obsolete and susceptible to failure with age,” the PSC wrote in a 2018 order approving a modernization plan.

When aging pipes fail, then tend to make headlines. Last year, a gas explosion ripped the façade off a Maryland office complex in Columbia, affecting more than 20 businesses. No one was injured in the explosion, which happened early on a Sunday morning. In 2016, a gas main break forced the evacuation of the Baltimore County Circuit Courthouse. Under Armour Inc. had to evacuate its Baltimore office after a gas main break in 2012.