In divided Baltimore, students try to foster relationship with neighborhood

At a school where most students are black, in a neighborhood where the majority of residents are white, the students are trying to tackle assumptions about who they are.
(1/5) 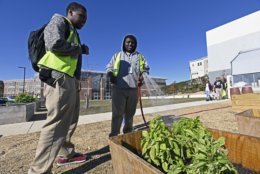 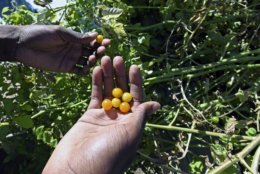 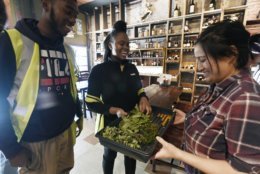 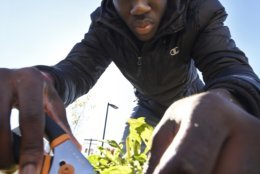 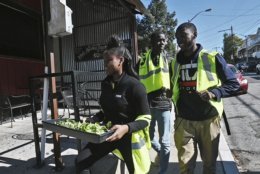 BALTIMORE (AP) — The students showed up on Eleanor Schwartz’s front porch with a handwritten note and a potted sunflower.

They were going door-to-door along Hampden’s Berry Street with a mission: Change the way adults think about their school.

The Academy for College and Career Exploration is in the heart of the North Baltimore neighborhood, but students ride the bus there from all corners of the city. At a school where most students are black, in a neighborhood where the majority of residents are white, the students are trying to tackle assumptions about who they are.

In this hyper-segregated city, students choose from a portfolio of citywide high schools, regardless of where they live. This has led to a handful of schools, like ACCE, where the demographics of the students differ dramatically from those in the neighborhood.

The setup has caused some residents to feel disconnected from the school building next door — and hostility toward the students who go there to learn each day. The kids, meanwhile, can feel that they’re being profiled.

The teenagers have heard about past neighborhood meetings at which people complained about them being loud and disrespectful as they leave school. They’ve seen posts on the community’s Facebook page describing them as trouble. Tensions at times ran high enough that mediation was needed.

“When we walk past them, they’ve got this look in their eyes,” said Jamaal Wescott Jr., an ACCE senior who lives near the Baltimore County line. “It’s sad, because some of us really care about this community.”

The loudest and nastiest complaints, said community council president Eli Lopatin, are from a small group of residents. Most people are supportive of the school, he said.

“Hampden has historically had a bit of a mentality of being a contained neighborhood and not always appreciating folks coming in,” Lopatin said. ”I know the students can sometimes feel like they’re in a place where they’re not wanted … and it can create a closed off-ness from both ends.”

Adding to friction are resident reports that, over the years, ACCE students have been involved in fights, vandalism and shoplifting in the area. When complaints bubble up, other residents say they’re overblown and it’s just kids being kids.

“Kids in Hampden have been beating each other up all along,” said Schwartz, who has lived on Berry Street for 19 years. “The white kids are doing it, too.”

Ever since ACCE reopened in 2018 after a massive renovation, members of the school and the neighborhood have put a renewed emphasis on the relationship.

Nicholas D’Ambrosio stepped into the role of ACCE principal last year and started stationing teachers along students’ routes to the bus stop to make sure dismissal went smoothly.

He began inviting neighbors to join in ACCE cookouts and game nights, and became a regular presence at the Hampden Community Council’s monthly meetings. Some neighbors show up at the events, and the council, meanwhile, has held coat drives for students in need.

The kids themselves took steps to improve relations, such as delivering flowers to their neighbors.

Still, as school and neighbors work toward their goal, they are confronting the kinds of issues that divide so much of Baltimore.

“It’s hard to think race is not a pretty significant part of the equation,” said Roger Schulman, president of the Fund for Educational Excellence, a Baltimore nonprofit working to improve student success.

A history of tension

This sprawling brick building off 36th Street has long been associated with racial tensions.

A 1970s-era busing program brought black students to what was then Robert Poole Middle School. As the school grew more integrated, some white students had an extreme reaction. By 1991, a dozen of them had openly declared their support for the Skinheads, a white power group.

The teenagers enrolled at ACCE today travel from several ZIP codes. The school serves grades six through 12, but 80% of the students are in the high school.

Baltimore City’s school system allows every eighth-grader to apply for any high school across the city. This system of choice has in many cases altered the traditional idea of neighborhood schools, places where residents come together for Friday night football and root for the kid next door. New high schools, such as ACCE, replaced “zoned” neighborhood schools, many of which had poor academic reputations.

City schools CEO Sonja Santelises acknowledged that the dynamic can be “combustible.”

But that doesn’t mean she wants to chip away at the city’s choice system, which is based on the idea that “every family no matter what the ZIP code deserves to have access to what they understand is a high quality school that matches their student.”

“The cost of choice is not having local neighborhood high schools where everybody knows your name,” Santelises said. “It’s where we are right now.”

Some residents say they’re bothered by the school because they want it to be for Hampden children. “When they build a nice new school and kids in the neighborhood can’t go there, they get mad about it,” said longtime resident John Hare.

In fact the school is open to anyone, leaders say.

The lack of many Hampden kids at the school has long been a “bone of contention,” said school co-founder Karen Sitnick. “We always wanted more Hampden students, but they didn’t seem to be coming.”

The area surrounding ACCE is almost 80% white, according to the latest city data, and about half of the 450 students at Hampden’s neighborhood elementary/middle school, are white.

But most of those students aren’t ending up at ACCE. Of the roughly 550 students enrolled at there last year, just 17 were white.

School system data indicates students in the neighborhood don’t want to attend ACCE. Only 25 ACCE high schoolers come from same ZIP code as the school. The majority of kids who graduated from Hampden Elementary/Middle last year are now enrolled at other schools, many with entrance criteria, like top-rated Baltimore Polytechnic and City College.

ACCE doesn’t have entrance criteria and is among the lowest-rated high schools, according to the state education department’s school ranking system. Kids get in by filling out the city’s choice application, and if there are more applicants than spots, the school holds a lottery.

Other citywide high schools have faced similar tensions with their communities where the demographics of the school don’t reflect that of the neighborhood.

Digital Harbor High, located in the heart of affluent Federal Hill, also has struggled to recruit neighborhood kids to fill its seats. About 80% of Federal Hill residents are white, while only 7% of Digital Harbor students are.

ACCE administrators, and even students, acknowledge there have been groups of kids who made poor decisions, as when fights have broken out near the neighborhood’s main street. But they also say some residents have lashed out at the students. A longtime teacher says he’s been walking with students when people have shouted from their cars, “Go back to Africa.”

Though there have been some flare-ups over the past year, many in the community say things have improved since the 2018 ACCE renovation. Staff say they used the transition as a chance to work on the school’s culture.

“The new school,” Schwartz said, caused everyone to have “more respect.”

The desire to show residents who the teenagers really are was part of the impetus behind a school gardening project run by social studies teacher William Moeller. Every Thursday, students in his economics class harvest basil, tomatoes and arugula they grow and deliver it to local restaurants.

Chuck’s Trading Post around the corner even created a sandwich named for the school, filled with some of the students’ homegrown ingredients.

Through all the outreach, Principal D’Ambrosio said, “we’re not trying to change who we are to fit in.”

Jamaal, who is ACCE’s student body president, thinks residents who make disparaging comments about his classmates might feel differently if they learned more about them. He wants them to know the school started offering AP classes this year and that students intern at businesses in the community.

“I wish they knew I was the type of person to help them if they needed something,” said Jamaal, an aspiring mechanical engineer. “If they need work done on their house, I could help.”

Schwartz said she likes living across the street from the school, especially since the building was renovated. She said she hears some residents railing against the kids, but largely ignores them.

There are other signs the relationship is mending:

All along Berry Street, neighbors display the flower pots given to them by the ACCE students.