1 dead, 1 wounded in shooting during funeral at Baltimore-area cemetery

One person was killed, another wounded, and a high school was briefly on lockdown after a shooting during a funeral at a cemetery near Baltimore Wednesday.
Listen now to WTOP News WTOP.com | Alexa | Google Home | WTOP App | 103.5 FM

WASHINGTON — One person was killed and another wounded in a shooting during a funeral for another shooting victim at a cemetery near Baltimore Wednesday.

The Baltimore County police said that the shooting happened at the Mt. Zion Cemetery, on Hollins Ferry Road in Lansdowne, at about 12:45 p.m. The Baltimore City police told the county police the funeral was for 18-year-old Marcus Brown, who was shot and killed last month in West Baltimore.

After the funeral procession began, a small group of men broke away from then rest of the group, and gunfire broke out among them, the county police said.

The police said two people were shot. One was pronounced dead at the scene; another was taken to a hospital. The police described the second victim as being in “grave” condition.

Lansdowne High School was on lockdown for about 15 minutes, until about 2 p.m., the police said. 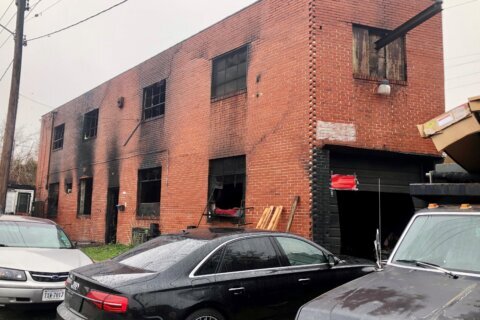 Three injured, including teen, in explosion in Baltimore’s Pigtown neighborhood