Jackson leads Ravens back to 31-25 OT win over Colts

Lamar Jackson threw a 5-yard touchdown pass to Marquise Brown on the first possession of overtime to give the Baltimore Ravens a 31-25 victory over the Indianapolis Colts on Monday night.
Listen now to WTOP News WTOP.com | Alexa | Google Home | WTOP App | 103.5 FM
(1/15) 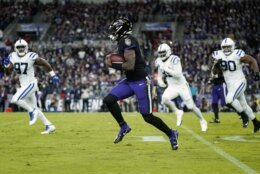 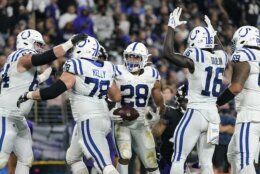 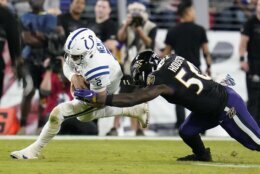 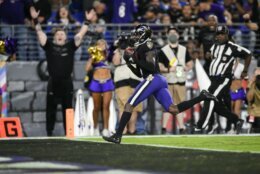 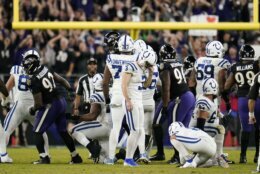 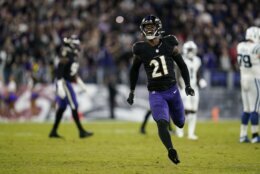 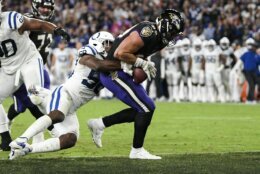 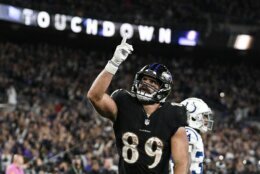 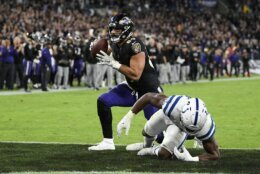 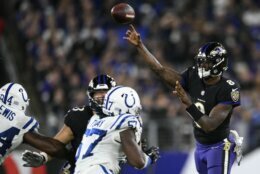 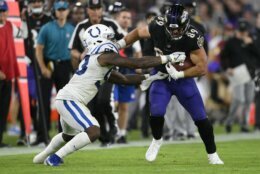 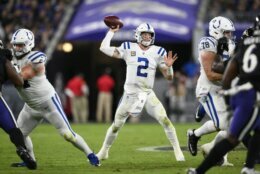 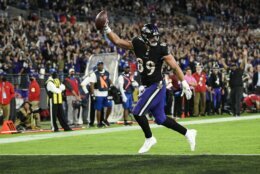 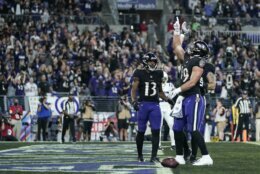 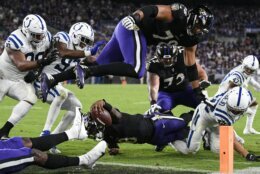 BALTIMORE (AP) — Even more than usual, the Baltimore Ravens needed Lamar Jackson to do pretty much everything as they tried to climb out of a second-half hole.

Their running backs had been stopped, and another key offensive player had left with an injury — but the Ravens still had their star quarterback, whose latest scintillating effort may have been the best of his young career.

“It’s one of the greatest performances I’ve ever seen,” coach John Harbaugh said. “It wasn’t easy. It wasn’t like we came out, just up and down the field. We had to overcome and fight through some things.”

Jackson threw a 5-yard touchdown pass to Marquise Brown on the first possession of overtime to give the Ravens a 31-25 victory over the Indianapolis Colts on Monday night. The Baltimore quarterback threw for a career-high 442 yards and four touchdowns, including a pair of short TD passes to Mark Andrews in the fourth quarter as the Ravens rallied from a 25-9 deficit.

Jackson went 37 of 43 without an interception. He also ran for 62 yards. If you subtract the 5 yards Jackson lost when sacked, he accounted for 499 of Baltimore’s 523 net yards on the night.

“I was just locked in,” Jackson said. “I was just calm. Everything was just moving slow.”

The Ravens had to withstand a 47-yard field goal attempt by Rodrigo Blankenship on the final play of regulation, but the Indianapolis kicker missed, sending the teams to overtime.

The Ravens had their record-tying streak of 43 straight 100-yard rushing games snapped, and it looked like they were in big trouble after Jackson fumbled near the goal line in the third quarter. But after that turnover, Baltimore scored a touchdown on each of its final four possessions.

The Indianapolis kicking game was a big reason the game got to overtime. Blankenship — who hurt a hip in warmups — missed an extra point in the third quarter. With the Colts up 25-17, he had a 37-yard kick blocked by Calais Campbell with 4:29 remaining, giving the Ravens a chance to tie the game.

Jackson directed an 11-play, 75-yard drive that ended with a 4-yard touchdown pass to Andrews with 39 seconds remaining. Then Jackson flipped a 2-point conversion pass over the middle to Andrews to tie it.

The Colts (1-4) made it back into field goal range, with the help of an unnecessary roughness penalty on Baltimore’s Tavon Young with 13 seconds left, but Blankenship’s kick sailed wide left.

Wentz threw for a career-high of his own, 402 yards and two touchdowns. Jonathan Taylor scored on a 76-yard swing pass early in the first quarter, then added a rushing touchdown in the third as the Colts took a 22-3 lead.

But the game was far from over.

“A guy like Lamar, you know he’s going to have a couple plays,” Taylor said. “He’s a special player.”

The Ravens (4-1) took over sole possession of first place in the AFC North after Cleveland and Cincinnati lost Sunday.

The first half was fairly uneventful, but the Ravens started and finished it poorly. On third-and-15, Taylor took a swing pass, slipped into the Baltimore secondary and outran everyone for a touchdown just 2:01 into the game.

There was no more scoring until late in the second quarter, when the Ravens settled for Justin Tucker’s 23-yard field goal. The Colts had enough time to drive back the other way, and after converting on fourth-and-11, they set up for a field goal.

The kick was missed, but Baltimore’s Marlon Humphrey had jumped offside. Blankenship made the re-kick from 37 yards for a 10-3 lead at the half.

Indianapolis got the ball first in the second half and took a 16-3 lead on Wentz’s 42-yard scoring pass to Michael Pittman Jr. Jackson drove the Ravens back the other way, but on first-and-goal from the 1, he lost the ball and Darius Leonard picked it up for the Colts.

Leonard ran it back to about the Indianapolis 25, then lateraled to Isaiah Rodgers, who went the rest of the way for an apparent touchdown. It was ruled a forward lateral after a review, so that part of the play was negated, but the Colts still got the ball and quickly drove for a TD. Taylor’s 4-yard run made it 22-3.

Jackson threw a 43-yard touchdown pass to Brown late in the third.

The Ravens finished with 86 yards rushing. Running backs Latavius Murray, Ty’Son Williams and Devonta Freeman combined for just 24 yards on 11 carries. This was one game when Baltimore seemed to be affected by the season-ending injuries to running backs J.K. Dobbins and Gus Edwards.

That ended Baltimore’s streak of 100-yard games, which tied the 43-game run by the Pittsburgh Steelers during the 1970s. The Ravens kept the streak alive when, instead of taking a knee, they ran for a few yards on the final play of their win over Denver in their previous game.

The Ravens inducted DT Haloti Ngata into their Ring of Honor at halftime. Ngata played nine seasons with the Ravens and helped the team to its victory in the 2013 Super Bowl.

Colts: CB Xavier Rhodes was evaluated for a concussion.

Ravens: OL Ben Cleveland was carted off with a knee injury in the second quarter. OL Kevin Zeitler injured his knee as well.