Ravens receiver Watkins moves from one contender to another

Since joining the Baltimore Ravens this offseason, Sammy Watkins has noticed some similarities between his new team and his previous one.
Listen now to WTOP News WTOP.com | Alexa | Google Home | WTOP App | 103.5 FM
(1/5) 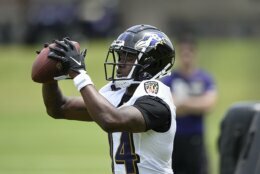 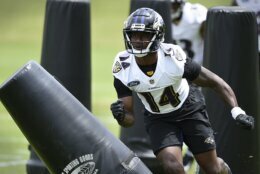 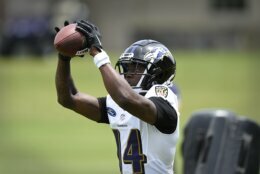 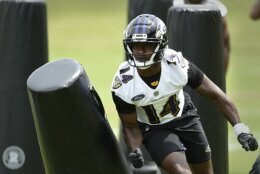 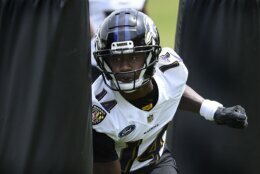 OWINGS MILLS, Md. (AP) — Since joining the Baltimore Ravens this offseason, Sammy Watkins has noticed some similarities between his new team and his previous one.

”It feels like Kansas City to me,” Watkins said Wednesday. “It feels like a team that’s ready to win the Super Bowl.”

Watkins’ optimism is understandable — he’s joining a team that went 11-5 and 14-2 the past two seasons — but there’s one area in which the Ravens have been noticeably different from the Chiefs recently. While Kansas City ranked No. 1 in the NFL in passing last season, Baltimore was last.

Watkins was acquired to help fix that.

“I just go out there every day trying to be a leader,” Watkins said. “I think this offense has been top in the league with running the ball, and if we can correlate both running and passing into the offense, I think this offensive team can be dangerous.”

Watkins practiced with the Ravens on Wednesday. This is his fourth NFL team. He spent three seasons with both Buffalo and Kansas City, plus a year with the Los Angeles Rams sandwiched in the middle.

He averaged more than 1,000 yards a season through his first two years with Buffalo, but after that his numbers dropped. Only once has Watkins appeared in all 16 games — and last season, he played in only 10. His 421 yards receiving in 2020 would have ranked fourth on the Ravens.

Still, he had 14 catches in three postseason games during Kansas City’s run to the Super Bowl title two years ago. Watkins has certainly shown he can be productive if healthy.

After signing with Baltimore, Watkins is experiencing a reunion of sorts with Tee Martin, a wide receivers coach for the Ravens. Watkins worked out with Martin before he was drafted.

“Been very familiar with him and really watched his game develop throughout his career at Buffalo and Kansas City, and was really excited to have him join our team,” Martin said.

The Ravens also tried to add some receiving help in the draft, taking Rashod Bateman of Minnesota with the 27th pick. They used a first-round pick in 2019 on a receiver as well, when they took Marquise Brown. He has 104 catches through two seasons and led the team with 769 yards receiving last year.

Although Watkins is a veteran compared to Brown and Bateman, he’s joining a new team, so there’s an adjustment period.

“I’ve played in numerous offenses, but this one is very complex. It’s a lot of motion, a lot of moving around,” Watkins said. “Honestly, I’m learning from the young guys right now. They’re kind of helping me, putting me in certain spots, and I’m learning certain routes from them.”

Although there’s pressure on quarterback Lamar Jackson and the receivers, the Ravens’ passing game doesn’t necessarily have to become as good as Kansas City’s. Simply improving on last season’s output — and there’s plenty of room for that — could make a big difference.

“We’ve got to be unselfish, and the more we can go out there and play for each other … and not worry about the yards or stats or how many catches,” Watkins said. “If we have to run the ball 25 times a game, that’s what we have to do. We can’t worry about who’s getting the ball.”

NOTES: Outside linebackers coach Drew Wilkins said LB Pernell McPhee has been taking care of his great-grandmother, who is in hospice care in Florida. McPhee has been participating in Zooms with the team. … A brief scuffle broke out during practice involving DT Justin Madubuike and OL Patrick Mekari. It was broken up quickly.