Trey Mancini is heading to Houston.

The 2021 AL Comeback Player of the Year was shipped from the Baltimore Orioles to the Astros Monday afternoon, just over 24 hours before the 2022 MLB trade deadline.

Dan Connolly of The Athletic was first to report the transaction. The Orioles later confirmed the move:

Mancini joined the Orioles organization as an eighth-round pick in 2013. He made his big league debut in 2016 and was Baltimore’s longest-tenured player.

The first baseman missed the 2020 MLB season after being diagnosed with Stage 3 colon cancer and undergoing five months of chemotherapy. He made a triumphant return in 2021 and received his AL Comeback Player of the Year honor.

The Orioles are up to .500 this season with a 51-51 record, but the Astros are aiming for their first World Series since 2017. Houston (67-36) leads the AL West by 12 games and trails the New York Yankees by just two games for the AL’s top seed.

Houston could be getting Mancini for more than this year’s stretch run. Mancini has a $10 million mutual option for the 2023 season.

Mancini’s new team will square off against his now-former team several times over the next two months. The Orioles will travel to Houston for a three-game set from Aug. 26-28. Mancini will have his chance at a homecoming when the Astros head to Camden Yards for a four-game series from Sept. 22-25. 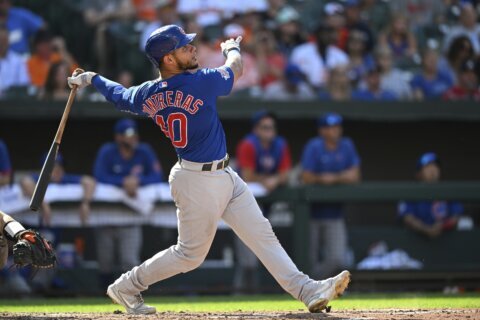