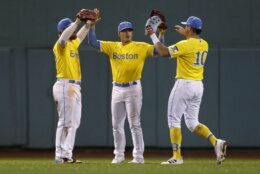 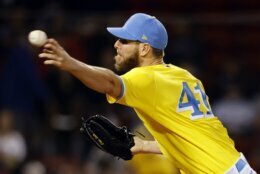 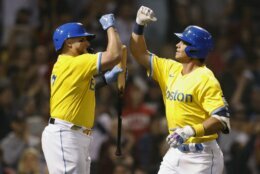 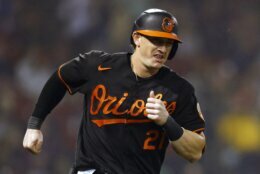 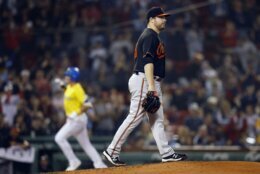 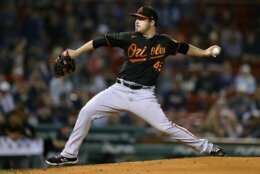 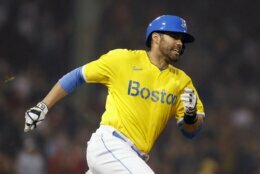 After testing positive for COVID-19 — for the second time — the Red Sox left-hander borrowed a portable pitcher’s mound from Babson College and had some weights brought out to his house. His back yard was big enough for him to play long toss at 90 feet, and for a six-inning simulated game on his regular day to pitch.

“I stayed on my exact schedule,” Sale said on Friday night after returning from the COVID-19 injured list to pitch five innings of two-hit ball and beat the Baltimore Orioles 7-1.

“I didn’t have the big (weights), the squat rack there or some other things. I made do,” he said. “I’ve been in worse situations.”

One night after beating the New York Yankees in a walk-off win, Baltimore again helped the Red Sox close in on a playoff berth.

Alex Verdugo had three hits and a sliding catch in the left-field corner, and Hunter Renfroe had a three-run double for the Red Sox, who entered the night in a virtual tie with Toronto for the two AL wild-card spots; New York was a half game back. The Yankees beat Cleveland 8-0 and Minnesota topped Toronto 7-3 on Friday, leaving Boston and New York in playoff position at the end of the night, with the Blue Jays a half-game back.

“You’ve just got to get in. No one knows what’s going to happen once those lights flick on,” Sale said. “You catch a hot streak, and you’re looking up and you’re holding a trophy.”

Baltimore became the first team to reach 100 losses this season; Arizona entered the night at 99. The Orioles have lost at least 100 in each of the last three 162-game seasons.

Sale (4-0) spent all of 2020 and the first 4½ months of this season recovering from Tommy John surgery. Then, after five starts, he tested positive for the coronavirus on Sept. 10 and was scratched from the following start. He was activated from the IR on Friday.

The seven-time All-Star allowed a home run off the Green Monster light tower to Austin Hays, and Cedric Mullins’ single. Sale struck out one, walked none and hit a batter, leaving after five innings and 79 pitches with a 3-1 lead.

“Chris Sale finds a new way to amaze me every time he takes the mound,” said Red Sox reliever Matt Barnes, who also returned from the COVID list on Friday. “The guy’s been nails ever since he’s been in the big leagues.”

J.D. Martinez doubled in a run in the fifth to make it 4-1. All four runs were charged to Keegan Akin (2-10), who gave up six hits and three walks before leaving when he walked the leadoff batter to start the fifth.

Renfroe hit a bases-loaded double in the sixth that Mullins dove for in center but couldn’t get, scoring three more runs.

The Red Sox wore their yellow and blue Boston Marathon-themed uniforms that they had debuted on Patriots Day.

Barnes had been pitching himself out of the closer’s job before he tested positive for the coronavirus and going on the COVID list. After posting a 2.25 ERA through Aug. 4, he allowed 10 runs over 5 2/3 innings in his next 10 outings.

He returned Friday night for his first appearance since Aug. 29 and pitched the eighth, walking the leadoff batter before giving up a one-out single. But he retired Mullins on a popup and struck out Ryan Mountcastle to end the inning.

“I finished the inning a lot stronger than I started it,” he said. “There’s no way to simulate pitching in a big league game except doing it. The adrenaline starts kicking up. I had to slow it down a little bit.”

Orioles: Trey Mancini (right oblique/abdomen) returned to the lineup at DH, and Pedro Severino (upper leg/groin discomfort) was back at catcher after missing back-to-back games.

Red Sox: Sale was reinstated from the COVID-19 injured list before the game. Right-handed reliever Matt Barnes was also reinstated from the list and returned from his injury rehab assignment with Double-A Portland. To make room for them, RHP Ryan Brasier was optioned to Triple-A Worcester and RHP Michael Feliz was designated for assignment.