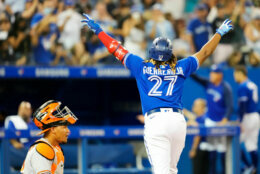 Guerrero hit a solo home run off right-hander Chris Ellis in the fourth inning and a three-run blast off righty Marcos Diplán in the seventh. It was the seventh multi-homer game of Guerrero’s career and his fifth this season.

Bo Bichette hit a game-tying single off Dillon Tate (0-4) in the sixth, and Teoscar Hernández followed with a two-run double as the Blue Jays rallied to win their third straight.

Toronto’s George Springer went 1 for 2 with a walk, scored twice, was hit by a pitch and stole a base in a busy return to the lineup after missing 13 games because of a sprained left knee.

“He gets on base, he makes things happen,” Ray said of Springer. “He’s got that veteran presence at the top of our lineup. He’s been there before, he knows how to grind.”

Springer, who was activated off the injured list before the game, is expected to be limited to designated hitter for now. He was injured Aug. 14 while trying to make a leaping catch at the wall in Seattle.

“I don’t want to sit on the bench; I want to play,” Springer said. “I felt good enough to go and glad to be back out there.”

Ryan Mountcastle homered and had two RBIs for the Orioles. The loss dropped Baltimore to 3-24 in August.

Toronto’s Trent Thornton gave up a run and allowed three batters to reach in the ninth, including a pop single from Anthony Santander that bounced off the mound. Jordan Romano came on to record the final two outs, earning his 14th save in 15 chances.

After matching his career high by striking out 14 White Sox batters in his previous start, Ray fanned 10 Orioles, reaching double digits for the third straight game and eighth time this season. In doing so, Ray reached 202 strikeouts for the season, reclaiming the AL lead from New York Yankees right-hander Gerrit Cole.

“He gave us everything he had,” Springer said. “He does that every time he has the ball. He has a presence about him that I think kind of oozes onto us a little bit.”

“We were aggressive, but he was in the strike zone, and he’s got really good stuff,” Hyde said “He’s been doing that to the league this year.”

Ray (10-5) allowed two runs and four hits. The left-hander had taken no decisions in five straight starts despite pitching at least six innings and allowing two runs or fewer in every outing, something just eight other pitchers have done within a single season.

Ray needed just one pitch to record his first out of the game. Two pitches later, however, he was trailing, after Mountcastle connected for his 25th home run.

Mountcastle put the Orioles in front with an RBI single in the sixth, but Tate couldn’t hold on in the bottom half.

Making his second career start, Ellis allowed one run and two hits in 4 2/3 innings. The run came on Guerrero’s leadoff homer in the fourth.

“He did everything we could have asked him to do tonight,” Hyde said of Ellis.

Mountcastle trails only Eddie Murray (27) and Cal Ripken Jr. (28) for home runs by a Baltimore rookie.

One of the shortest road trips on Toronto’s schedule turned into one of the longest Sunday when severe storms in the Detroit area left the Blue Jays grounded as they attempted to fly home from a weekend series against the Tigers. After four hours spent sitting on the tarmac, the team returned to its hotel for the night and flew home Monday, landing in Toronto around midday.

Orioles: OF Cedric Mullins was held out of the starting lineup, but pinch-hit in the ninth, striking out to end the game.

Blue Jays LHP Hyun Jin Ryu (12-7, 3.88) starts Tuesday against Orioles LHP Keegan Akin (1-8, 7.26). Ryu is 4-0 in six career games against Baltimore, including 3-0 in three starts this season. Akin beat the Angels last Thursday for his first victory of the season.