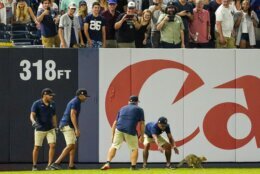 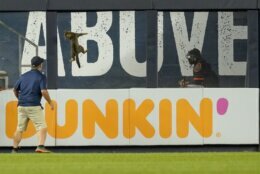 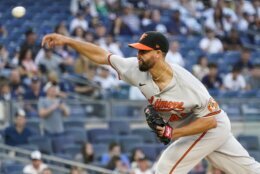 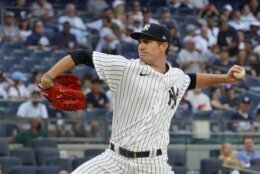 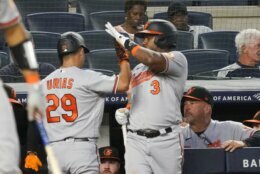 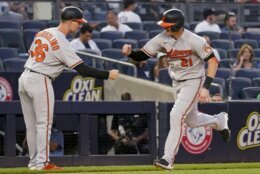 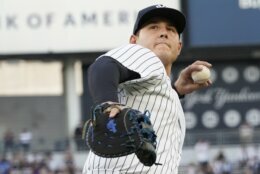 NEW YORK (AP) — In a game delayed for several minutes while a bevy of groundskeepers tried to corral a scaredy cat in the outfield, the Baltimore Orioles hit four solo homers off Yankees newcomer Andrew Heaney to beat New York 7-1 Monday night.

The Orioles held a six-run lead in the eighth when the tabby emerged from the third base side as Yankees star Aaron Judge batted against Paul Fry.

The cat sped past Baltimore left fielder Ryan McKenna, then got on the warning track and dashed back and forth. The feline climbed up on the low padding along the wall and tried to scale the bullpen fence, but kept falling back down.

Fans chanted “MVP! MVP!” as the cat eluded its would-be captors, even after being surrounded by several of them near the 318-foot mark in left field.

Only after 3 1/2 minutes did the cat leave the field, darting into an open gate near the seating area along the third base line.

Once the cat exited, Judge flied out.

Long before the cat made its appearance, Cedric Mullins and Austin Hays hit back-to-back homers in the third off Heaney (6-8).

Ryan Mountcastle and Ramón Urías also went deep to spoil the debut of Heaney, who was acquired from the Los Angeles Angels just before Friday’s trade deadline.

Heaney tied a career high by allowing four homers for the second time. The other instance was in 2017 also against Baltimore.

It was the first time a Yankee starter allowed four homers since James Paxton on July 26, 2019, at Fenway Park against the Boston Red sox.

Heaney gave up four runs on six hits in six innings with the homers coming in a span of six batters in the third and fourth.

Jorge López (3-12) took a no-hitter into the sixth and allowed one run and one hit in six innings. He worked around a career-high five walks and struck out four for his first win since June 6 to end a nine-start winless skid.

Anthony Rizzo hit a sacrifice fly in the fifth and has an RBI in his first four games with the Yankees. Joey Gallo started in left field and ended López’s no-hit bid with a clean double to open the sixth.

Mountcastle homered on the first pitch of the fourth and two batters later Urías sent a drive into the visitor’s bullpen beyond the left-center field fence.

Sacrifice flies by Pedro Severino and Maikel Franco gave Baltimore a 6-1 lead in the sixth. A double-play grounder by Anthony Santander made it 7-1 in the eighth.

After two appearances in left field during the weekend in Miami, Yankees star Giancarlo Stanton started in right field for the first time since June 24, 2019.

Mullins extended his hitting streak to 11 games to match a career high. He also hit in 11 straight games May 5-18.

Orioles: SS Richie Martin was activated from the 60-day injured list. Martin has not played since 2019 due to a fractures in both wrists. He fractured his right wrist in a July 2020 intrasquad game and fractured the other wrist in a collision with a fence in May.