Bobby Dalbec snapped an 0-for-27 skid with a single and a three-run homer, powering the Boston Red Sox to a 6-2 victory over the Baltimore Orioles on Friday night.
Listen now to WTOP News WTOP.com | Alexa | Google Home | WTOP App | 103.5 FM

BALTIMORE (AP) — Bobby Dalbec snapped an 0-for-27 skid with a single and a three-run homer, powering the Boston Red Sox to a 6-2 victory over the Baltimore Orioles on Friday night.

“I just tried to have fun and see the ball,” Dalbec said. “It felt really good to get a couple (of hits) and to get something rolling. I just have to keep working.”

Eduardo Rodriguez (5-0) allowed one run and seven hits with two strikeouts and three walks over five innings to help the Red Sox improve to a major league-best 20-13.

Boston has won the last nine games Rodriguez has started against Baltimore, where he originally signed as an international free agent in January 2010 before being traded to the Red Sox for reliever Andrew Miller.

“I love pitching no matter where it is,” Rodriguez said “I will say, for the couple starts of my career, I was excited to pitch over here because that’s where I signed from Venezuela. But now, it’s just another ballpark to me.”

Ryan Mountcastle had three hits, including his first homer since the Orloles’ home opener on April 8.

The game was delayed 1 hour, 38 minutes because of rain.

Rafael Devers reached on a two-base error in the fourth inning by Matt Harvey, who couldn’t handle Pat Valaika’s throw. After stealing third, Devers scored on a single by Hunter Renfroe and Boston led 1-0. Dalbec’s three-run shot later that inning boosted the lead to 4-0.

“He’s been working hard,” Red Sox manager Alex Cora said about Dalbec. “It’s good to see those swings, This is such a tough sport. For him to see results, it’s a good feeling. Hopefully, he can take off now.”

Harvey (3-2) snapped a three-game winning streak, allowing four runs — all unearned — and four hits, with three strikeouts and a walk over four innings. He managed to lower his ERA from 4.06 to 3.60.

“I just really didn’t have it tonight,” Harvey said. “Kind of just was all over the place, really just physically didn’t feel that great and wasn’t able to get it done. I wasn’t able to limit the damage when I needed to that inning and it just wasn’t a good start.”

A single by Trey Mancini gave the Orioles their first run of the night in the fifth and Mountcastle cut the margin to 4-2 with a solo homer an inning later off Hirokazu Sawamura.

Christian Vazquez and Marwin Gonzalez each had an RBI double to round out the scoring for Boston.

“We kept playing and when we do that, we are a really good team,” Cora said.

The last time Red Sox DH J.D. Martinez played at Camden Yards on April 11, he came off the COVID-19 list and hit three home runs. This time, Martinez went 1 for 5 with two strikeouts.

Red Sox: INF/OF Kiké Hernandez was placed on the 10-day injured list with a right hamstring strain he sustained the previous night against the Tigers. In a corresponding move, Michael Chavis was recalled from Triple-A Worcester. “He can play first, second, third. We can put him in left field,” Cora said.

Orioles: OF Anthony Santander (ankle) is jogging and is close to starting baseball activities. Santander has not played since April 20 but could be back in the lineup in one or two weeks. … RHP Mac Sceroler (right shoulder tendinitis) threw a side session Friday and did not have any setbacks. Sceroler, a Rule 5 pick, is 0-0 with a 7.36 ERA in two games.

Orioles: Zac Lowther (0-0, 0.00 ERA) will get the first start of his career after throwing one scoreless inning out of the bullpen this season. 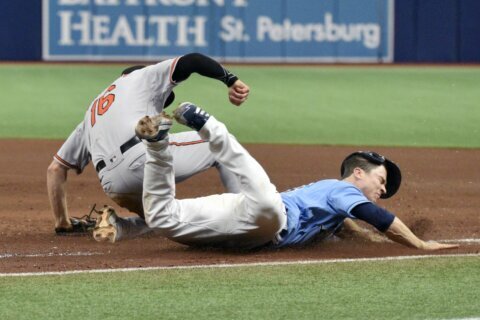