ARLINGTON, Texas (AP) — Trey Mancini had a tiebreaking RBI double in the eighth inning and the Baltimore Orioles won 6-1 at Texas on Saturday night, getting their runs against three relievers after Rangers rookie starter Dane Dunning threw six scoreless innings.

The Orioles snapped a 1-1 tie off lefty Joely Rodriguez (0-1) in his season debut. DJ Stewart and Maikel Franco had consecutive singles to start the eighth before Mancini doubled to left. Ryan Mountcastle then had a sacrifice fly when Gold Glove-winning right fielder Joey Gallo made a leaping catch on the warning track.

Freddy Galvis, who finished 4 for 4, had two-out double off Taylor Hearn in the seventh and scored Baltimore’s first run just ahead of a throw by Gallo when Cedric Mullins singled him home. Franco hit a two-run homer in the ninth off Brett de Gues.

“Just big to get the lead and tack on runs, one thing that we’ve kind of been short on the last few years,” Orioles manager Brandon Hyde said. “I was really impressed with our at-bats the last few innings.”

Mancini missed all of the pandemic-shortened 2020 season during treatment for colon cancer. Hyde said before the game that Mancini was putting so much pressure on himself and trying so hard after a year away, so the 29-year-old first baseman was the DH for only the second time, and dropped to fifth in the order.

After striking out four times in the series opener Friday, and two groundouts Saturday, Mancini was hitting .145. He then had hits his next two at-bats.

“To see him deliver in a couple of big spots, the base hit to right and then the ball down the left-field line, that’s huge for us and huge for him,” Hyde said.

Dunning extended his scoreless streak to 14 innings. The 26-year-old right-hander was acquired when the Rangers traded workhorse veteran starter Lance Lynn to the Chicago White Sox in December.

He struck out five while scattering five singles on his 75 pitches, and hasn’t given up a run since a homer in the first inning of his first start. He hasn’t thrown a four-seam fastball all season, relying instead on sliders and sinkers.

“For the most part, I trust what I’ve got and try to fill the zone as much as possible,” Dunning said. “I’m not going to be able to blow fastballs by people.”

Texas led 1-0 in the fourth on David Dahl’s RBI single against rookie right-hander Dean Kremer, who struck out six and walked one in his 4 2/3 innings. The Orioles got out of the fourth on a inning-ending double play after shortstop Galvis made a sliding stop up the middle.

“That’s a game-saver to turn two right there,” Kremer said.

The Rangers have lost five in a row at their second-year ballpark. “I’m not overly concerned about it. But we’ve obviously got to produce more at home … We’ve got to find ways to win in this ballpark,” manager Chris Woodward said. … Baltimore, 1-6 on its only homestand, is 6-2 on the road. … Gallo’s MLB-leading 15th walk in the eighth extended his season-opening on-base streak to 15 games. The last Rangers player with a longer streak to start a season was Ian Kinsler’s 25 in a row in 2008.

Going into Saturday’s games, only three pitchers had scoreless streaks of at least 14 innings this year. San Diego right-hander Joe Musgrove at 16, including his no-hitter at Texas on April 9 and Lynn at 15 2/3 innings, while Carlos Rodon of the White Sox has an active streak of 14 in a row after his no-hitter Wednesday against Cleveland.

Orioles: LF Austin Hays (right hamstring strain), on the injured list since April 5, likely will rejoin the Orioles for their series opener at Miami on Tuesday. “He’s progressed very well, played the last couple days and has checked all the boxes from a health standpoint,” Hyde said.

Rangers: DH Willie Calhoun (left groin strain) and 3B Brock Holt (right hamstring strain) were both activated from the injured list and were in the starting lineup. The Rangers optioned LHP Wes Benjamin and INF Anderson Tejeda to their alternate training site.

Rangers RHP Kyle Gibson (2-0, 4.05 ERA) tries to win his third straight start since recording only one out in the shortest opening-day start in franchise history. Orioles lefty John Means (1-0, 2.16) is coming off a no-decision against Seattle, the first time in seven starts he allowed more than one run. 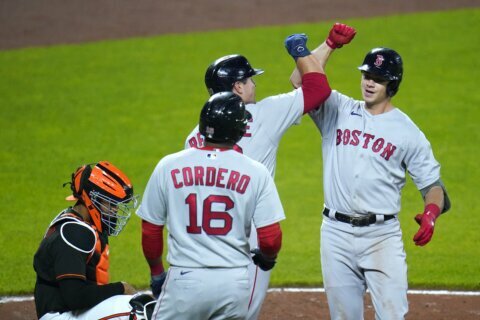 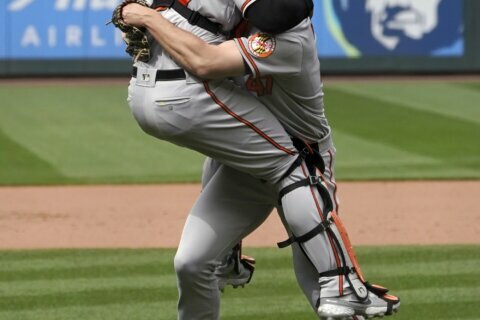