Orioles General Manager Mike Elias doesn’t have big plans for the Orioles in free agency this winter but mentioned the infield as a potential area the team could improve by signing new players.

Baltimore made its first move of the offseason Sunday, picking up veteran shortstop José Iglesias’s $3.5 million team option for 2021. The Orioles only had two players on their active roster hit free agency this offseason in catcher Bryan Holaday and pitcher Wade LeBlanc. As a result, they’re set to retain most of the players that helped them to a 25-35 record during MLB’s shortened 2020 season.

“We’re just going to have to see,” Elias said of the Orioles’ free agency plans in a Zoom press conference Monday. “We’re gonna monitor the market. I think while this sounds a little maybe strange for a team that was in fourth place last year with a losing record and has not been shy about saying that it’s rebuilding, I look at the players that either already are on our 40-man roster or are soon to be on our 40-man roster and it’s a very functional group that all of whom…either they have settled roles with the team or we wanna audition some of these guys and leaves paths open for them this year.”

MLB is coming off a season in which it lost a reported $3 billion in revenue. With there being no guarantee of fans returning to stadiums in time for next season, teams across the league are expected to cut back on spending in order to make up for lost income.

Factor in the uncertainty of MLB’s payroll structure beyond 2021 once the league’s Collective Bargaining Agreement with the players union expires, and not even those within the game are sure what to expect this offseason.

“Seems like this is the most uncertain free agent market, I don’t think anyone knows how it’s gonna go,” Elias said Monday in a Zoom press conference. “I was watching very carefully the option decisions that were taking place and the qualifying offers just to get some type of indicator and I think there was some interesting things there and we’ll see.

“Our revenue picture as an industry is so uncertain next year and that’s a big factor but also teams wanna win and there are good players out there. Eventually, this crisis is gonna pass — hopefully sooner than later — and so I think teams are gonna compete for players.”

The Orioles’ .417 winning percentage last season was their best mark in three years. Elias is optimistic about the pitching depth Baltimore has accumulated during its rebuild and noted that the organization’s crop of outfielders is “pretty fleshed out.” He didn’t rule out the possibility of adding to either the bullpen or the infield through free agency.

“The infield, we’re still addressing that with our arbitration class and with a move like Iglesias the other day and we’ll continue to monitor ways to fortify our infield,” Elias said. “But we have a lot of really interesting internal candidates on our roster there now and the same with the two catchers.”

With the Orioles reaffirming their commitment to Baltimore as key prospects such as Adley Rutschman and Grayson Rodriguez inch closer to the majors, Elias is hoping for a bright future at the end of their rebuild.

“We’re trying to get better, we’re trying to amplify the talent base across the whole organization as we’ve been talking about for two years now,” Elias said. “But I do feel like this is a group that’s not full of holes right now and our team is improving and got a little bit better two years ago, got a little bit better last year and there’s a lot of guys here that still have a lot of room to get better.

“There’s an interesting group here and we’re just gonna try to be smart about mixing in any additional acquisitions right now.” 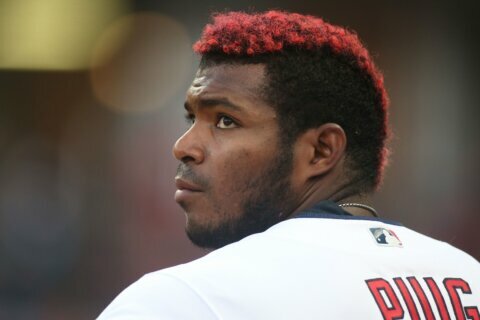