CORONAVIRUS NEWS: DC expands vaccine eligibility | Fauci on year of COVID-19 | Vaccine clinics in Md. churches | Sign up for WTOP's pandemic newsletter
Home » Back in the Day » Today in History 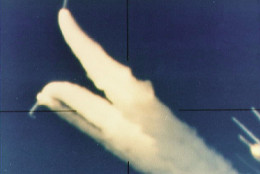 In 1547, England’s King Henry VIII died; he was succeeded by his 9-year-old son, Edward VI.

In 1911, the notorious Hope Diamond was sold by jeweler Pierre Cartier to socialites Edward and Evalyn McLean of Washington, D.C., for $180,000.

In 1915, the American merchant vessel SS William P. Frye, en route to England with a cargo of wheat, became the first U.S. ship to be sunk during World War I by a German cruiser, the SS Prinz Eitel Friedrich, even though the United States was not at war.

In 1956, Elvis Presley made his first national TV appearance on “Stage Show,” a CBS program hosted by Tommy and Jimmy Dorsey.

In 1973, a cease-fire officially went into effect in the Vietnam War, a day after the signing of the Paris Peace Accords by the United States, North Vietnam and South Vietnam.

In 1977, actor-comedian Freddie Prinze, 22, co-star of the NBC-TV show “Chico and the Man,” shot and mortally wounded himself at the Beverly Comstock Hotel (he died the following day).

In 1980, six U.S. diplomats who had avoided being taken hostage at their embassy in Tehran flew out of Iran with the help of Canadian diplomats.

In 1982, Italian anti-terrorism forces rescued U.S. Brig. Gen. James L. Dozier, 42 days after he had been kidnapped by the Red Brigades.

In 1985, the charity supergroup USA for Africa recorded the Michael Jackson-Lionel Richie song “We Are the World” at A&M Studios in Los Angeles.

Five years ago: With Donald Trump absent because of a feud with Fox News Channel, the other Republican presidential candidates strained to take advantage of a rare opportunity to step out of the front-runner’s shadow during a debate in Des Moines, Iowa. Dozens of educators who competed alongside Christa McAuliffe to become the first teacher in space gathered to remember the seven astronauts who perished aboard Challenger 30 years earlier. Death claimed Paul Kantner, a founding member of the Jefferson Airplane rock group, and former Providence, Rhode Island, mayor Buddy Cianci; both were 74.

One year ago: The United States and several other nations prepared to airlift citizens out of the Chinese city at the center of a virus outbreak that had killed more than 100 people. With Israeli Prime Minister Benjamin Netanyahu standing beside him at the White House, President Donald Trump unveiled his long-awaited Middle East plan, one that strongly favored Israel; it called for the eventual creation of a Palestinian state but would leave sizable chunks of the occupied West Bank in Israeli hands. Palestinians reacted angrily to the plan. Trump’s lawyers finished making their case for a speedy acquittal at his Senate impeachment trial.