SYDNEY (AP) — There are potentially good things ahead for women’s basketball in Africa despite the lack of success in…
Listen now to WTOP News WTOP.com | Alexa | Google Home | WTOP App | 103.5 FM

SYDNEY (AP) — There are potentially good things ahead for women’s basketball in Africa despite the lack of success in international competition.

But to turn the corner, there needs to be more financial investment by countries and exposure to the sport. FIBA Africa Regional Director Alphonse Bilé is optimistic and doesn’t believe it would take much to turn things around.

“It’s correct that if there would be more investment in the women’s game in Africa, it could help teams to achieve quickly,” Bilé said through a translator. “It actually would be easier in the women’s game then the men’s because the gap is smaller. So just to invest a little bit more, you have the opportunity to grow really fast.”

Bilé has held many roles in Africa, from playing for the Ivory Coast to coaching and eventually serving as the Secretary General of FIBA Africa. He feels that if countries invest more money into the women’s programs, African nations — which have only won nine games in its history in the World Cup — could be medal contenders in the near future.

“There’s many more countries now that are competitive, battling for spots in Africa” he said. “That’s the biggest difference from years ago when there were only a few teams.”

Mali showed flashes of being competitive in games, despite going 0-5 in the tournament. However, more attention was given to a fight between two players in the mix zone after a loss to Serbia then what they did on the court.

Mali’s coach Joaquin Brizuela Carrion agrees with Bilé that three or four teams from Africa could at least reach the quarterfinals if those countries invested more into programs.

“It just takes more investment from the countries,” he said.

Nigeria qualified for this tournament in Australia, but a dispute between the government and the basketball federation resulted in the team not traveling to Sydney. Mali replaced the Nigerian squad.

“It’s unfortunate because Nigeria could have been competitive,” Bilé said. “We tried everything to make it for the women (here) but because of deadlines, it wasn’t possible.”

Besides investment, Bilé said exposure to the game could help grow the sport. FIBA hasn’t announced the location of the next World Cup. Bilé mentioned there were a few African countries in Sydney to potentially look at putting in a bid for the 2026 tournament.

“There are some countries here that came here to see a bit of the organization and they are interested in exploring the idea,” he said. “The men’s tournament is too big, but the women’s one could be a good moment now to organize in Africa.”

There were full arenas in Senegal two years ago for the AfroBasket tournament with 15,000 people in attendance. Bilé envisions even more fans would come out if Africa hosted the World Cup, which has never been on the continent. 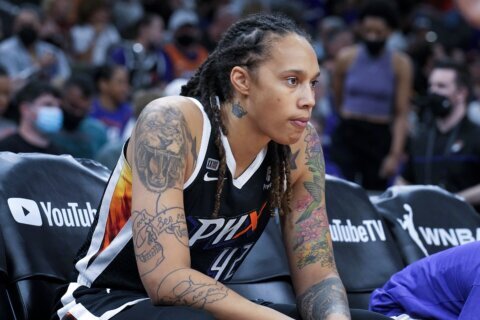