That was the message the new Twitter owner and billionaire head of Tesla and SpaceX had for younger people who might seek to emulate his entrepreneurial success.

“Be careful what you wish for,” Musk told a business forum in Bali on Monday when asked what an up-and-coming “Elon Musk of the East” should focus on.

“I’m not sure how many people would actually like to be me. They would like to be what they imagine being me, which is not the same,” he continued. “I mean, the amount that I torture myself, is the next level, frankly.”

Musk was speaking at the B-20 business forum ahead of a summit of the Group of 20 leading economies taking place on the Indonesian resort island. He joined the conference by video link weeks after completing his heavily scrutinized takeover of Twitter.

He had been expected to attend the event in person, but Indonesian government minister Luhut Binsar Pandjaitan, who’s responsible for coordinating preparations for the summit, said Musk could not attend because he’s preparing for a court case this week.

Testimony began Monday in a Delaware courtroom where Tesla shareholders are challenging Musk’s compensation plan as CEO, potentially worth more than $55 billion.

He’s got plenty else to keep himself busy.

“My workload has recently increased quite a lot,” he said with a chuckle in an apparent reference to the Twitter deal. “I mean, oh, man. I have too much work on my plate, that is for sure.”

The businessman appeared in a darkened room, saying there had been a power cut just before he connected.

His face, projected on a large screen over the summit hall, appeared to glow red as it was reflected in what he said was candlelight – a visage he noted was “so bizarre.”

While Musk was among the most anticipated speakers at the business forum, his remarks broke little new ground. Only the moderator was able to ask questions.

The Tesla chief executive said the electric carmaker would consider making a much cheaper model when asked about lower-cost options for developing countries like India and G-20 host Indonesia.

“We do think that making a much more affordable vehicle would make a lot of sense and we should do something,” he said.

Musk also reiterated a desire to significantly boost the amount and length of Twitter’s video offerings, and share revenue with people producing the content, though he didn’t provide specifics.

He bought Twitter for $44 billion last month and quickly dismissed the company’s board of directors and top executives.

He laid off much of the rest of the company’s full-time workforce by email on Nov. 4 and is now eliminating the jobs of outsourced contractors who are tasked with fighting misinformation and other harmful content.

Musk has vowed to ease restrictions on what users can say on the platform.

He’s reaped a heap of complaints — much on Twitter itself — and has tried to reassure companies that advertise on the platform and others that it won’t damage their brands by associating them with harmful content.

In his appearance Monday, Musk acknowledged the criticism.

“There’s no way to make everyone happy, that’s for sure,” he said. 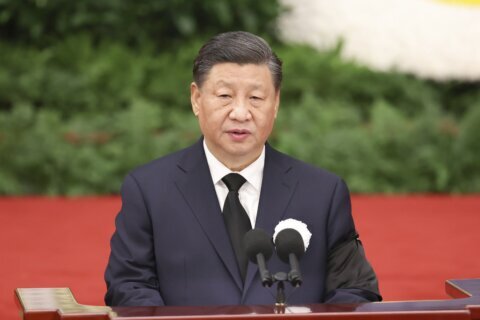