US to seek stronger labor, environmental standards in Asia

WASHINGTON (AP) — The U.S. is outlining its goals for a new trade deal with Australia, Japan, South Korea and nine other nations meant to signal the country’s commitment to working with the Indo-Pacific region at a time of growing Chinese clout.

The Office of the U.S. Trade Representative on Friday released its negotiating objectives for the Indo-Pacific Economic Framework, a deal with the 12 nations launched in May.

Among them, the U.S. wants the Indo-Pacific countries to improve their labor and environmental standards and ensure their markets remain open to competition, while also taking steps to ease supply-chain backlogs at border crossings.

After the Trump administration’s clashes with U.S. allies, Asian countries have welcomed America’s reengagement in the region, which also comes at a time of considerable economic disruption arising from COVID-19 and Russia’s invasion of Ukraine.

But many were disappointed the framework doesn’t lower tariffs or provide signatories with more access to the U.S. market.

The Obama administration had negotiated a detailed trade agreement with 11 other Pacific Rim nations, the Trans-Pacific Partnership. But President Donald Trump, saying the TPP and similar trade deals threaten American jobs, pulled out of the agreement in his first week in office. The other countries moved forward without the United States.

The Biden administration has no plans to rejoin the trade bloc and is instead promoting the Indo-Pacific framework. Critics consider the agreement a vague alternative to TPP.

“The future of the 21st century economy is going to be largely written in the Indo-Pacific,” the trade office said Friday. The framework “will help to drive sustainable growth for all our economies.”

The Biden administration said its trade team would also seek to promote digital trade, among other things.

USTR is handling the trade aspects of the framework. The Commerce Department is overseeing three other framework initiatives involving improving supply chains and promoting a green economy and “fair’’ growth that emphasizes the rule of law and labor rights. 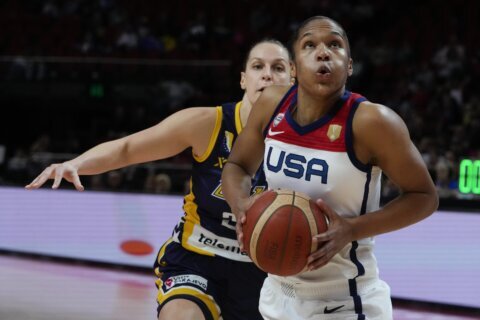