MANILA, Philippines (AP) — U.S. Sen. Edward Markey, who was once banned from the Philippines by former President Rodrigo Duterte, on Friday met a long-detained Filipino opposition leader, whom he says was wrongfully imprisoned under Duterte and should be freed.

Markey, a Democrat from Massachusetts, and a group of U.S. legislators met former Sen. Leila de Lima for more than an hour in her high-security detention cell in the main police camp in Metropolitan Manila, according to her lawyer, Filibon Tacardon, and police.

Details of their court-authorized meeting were not immediately available.

Duterte had banned Markey and two other American legislators from traveling to the Philippines after they called for de Lima’s release and raised alarm over human rights violations under his presidency. Duterte’s turbulent six-year term ended in June.

The former president’s brutal anti-drugs crackdown, which left thousands of mostly poor suspects dead, has sparked an investigation by the International Criminal Court.

Markey and his delegation met Marcos Jr. at the Malacanang presidential palace in Manila on Thursday. After the meeting, Marcos Jr. said he looked forward “to continuing our partnership with the U.S. in the areas of renewable energy use, agricultural development, economic reform, and mitigation of drug problems.”

A top critic of Duterte, the 62-year-old de Lima has been locked up for more than five years and has accused the former president and his then-deputies of fabricating the non-bailable drug-linked charges that landed her in jail in February 2017. Her arrest and detention effectively stopped her at the time as a senator from investigating the widespread killings under Duterte’s campaign against illegal drugs.

Duterte had insisted on her guilt, saying witnesses testified that she received payoffs from imprisoned drug lords. Several witnesses, however, have recently recanted their allegations against her, re-igniting calls for the Marcos Jr. administration to free her.

De Lima told The Associated Press in March in her first court-authorized jail interview since her arrest that she “cried every day, especially at night, in the first few weeks not really out of self-pity but for my family and out of disbelief.” She said she later settled down and continued to fight for human rights and the rule of law from behind bars.

She issued more than 1,200 handwritten daily statements from detention, mostly her critical thoughts on Duterte’s governance and reaction to breaking news like the 2020 U.S. electoral triumph of Joe Biden and Kamala Harris, which she welcomed as a victory of democracy over “fabricated populism,” and Russia’s invasion of Ukraine, which she called “an act of madness” that has put the world on edge.

She filed more than 600 proposed Senate bills and resolutions from jail, many aimed at strengthening human rights and government accountability and easing poverty. She ran for re-election in the May 9 elections under the main opposition bloc but a trial court banned her from joining online campaigning and debates.

Locked away from the campaign trail, de Lima sent a cut-out photo of herself to appear in her place. Amid her detention, de Leila lost her re-election bid.

They said then that the incoming administration of Marcos Jr. provided an “opportunity to reject the repression of the past, release Sen. Leila de Lima and embrace policies that support the rule of law and a vibrant free press in the Philippines.”

It was not immediately clear if Markey renewed his call for de Lima’s release in Thursday’s meeting with Marcos Jr. and how the Philippine leader responded. 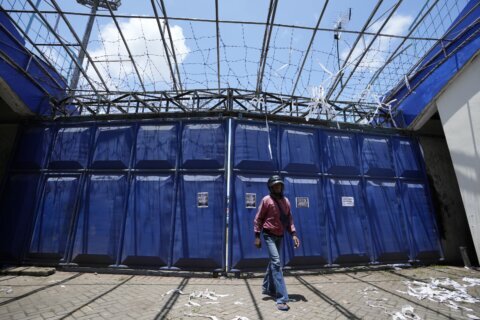