1864 — The first Travers Stakes at Saratoga is won by Kentucky, a horse that scores 20 consecutive victories.

1912 — John McDermott wins the U.S. Open golf championship for the second straight year with a 294 total.

1967 — The New Orleans Saints play their first preseason game and lose to the Los Angeles Rams, 77-16.

1979 — New York Yankees catcher Thurman Munson is killed in a plane crash practicing takeoffs and landings near his Ohio home.

1986 — Jackie Joyner sets the world record in the heptathlon at the U.S. Olympic Festival in Houston with 7,158 points.

1992 — Vitaly Scherbo of the Unified Team wins gold medals in the vault, rings, pommel horse and parallel bars to give him a total of six gold, the most won by a gymnast in a single Olympic Games.

1996 — Down to her final long jump attempt and fighting an injured hamstring, Jackie Joyner-Kersee leaps out of sixth place and ends her Olympic career with a bronze medal. Joyner Kersee jumps 22 feet, 11 3-4 inches for her sixth Olympic medal.

1998 — Brandie Burton closes with an even-par 72 for a tournament-record 18-under 270 to win the du Maurier Classic by one stroke over Annika Sorenstam. It’s the lowest score in relation to par at a women’s major, breaking Betsy King’s 17-under 267 in the 1992 LPGA Championship.

2005 — In the largest trade in NBA history, Antoine Walker is dealt from Boston to Miami in a transaction involving five teams and 13 players. The Heat acquire point guard Jason Williams and small forward James Posey from Memphis, while the Grizzlies receive guard Eddie Jones from the Heat. The New Orleans Hornets and Utah Jazz also are involved in the deal.

2012 — Carmelo Anthony and the U.S. men’s Olympic basketball team rewrite the record books in a 156-73 romp over Nigeria. Anthony scores 37 points, including 10 of 12 3-pointers, to break the U.S. single-game scoring record in less than three quarters. When Andre Iguodala hits a 3-pointer with 4:37 left, the Americans surpass the previous Olympic record of 138 points set by Brazil against Egypt in 1988.

2015 — American Pharoah delivers an encore performance in his first race since winning the Triple Crown, by cruising to a 2 1/4-length victory in the Haskell Invitational at Monmouth Park.

1852 — The first intercollegiate rowing race is held on Lake Winnipesaukee, N.H., where Harvard beats Yale by four lengths on the 2-mile course.

1985 — France’s Lutin D’Isigny becomes the first trotter to sweep the International Trot and Challenge Cup in consecutive years with a 3:03.1 time in the 1½-mile test.

1990 — The Professional Golfers Association Tour announces it will not hold tournaments at golf clubs that have all-white memberships or show any other signs of discrimination.

1996 — Andre Agassi, the Dream Team and the U.S. women’s 400-meter relay team win Olympic gold medals, while the American men’s 400 relay settles for silver. With Carl Lewis idled by a coach’s decision and Leroy Burrell injured, the men’s 400 team is shocked by Canada — the first time the U.S. lost the event at the Olympics.

2006 — Champ Car driver Cristiano da Matta needs surgery to remove a ruptured blood vessel in his head after his race car collides with a deer that wandered onto the track during a test session at Road America in Elkhart Lake, Wis.

2012 — Michael Phelps rallies to win the 100-meter butterfly for his third gold of the London Games and No. 17 of his career. It’s Phelps’ third consecutive win in the event at the Olympics, and his 21st career medal. Missy Franklin sets a world record in the 200 backstroke for the 17-year-old’s third gold in London.

2013 — Sixteen-year-old Katie Ledecky wraps up a brilliant performance at the world swimming championships with her fourth gold medal and second world record. The youngster turns it on over the final four laps of the 800 freestyle to win in 8 minutes, 13.86 seconds and take down the mark of 8:14.10 set by Britain’s Rebecca Adlington at the 2008 Olympics.

2016 — The International Olympic Committee approves baseball/softball, karate, sport climbing, surfing and skateboarding to be included in the 2020 Tokyo Games.

2016 — Elaine Thompson Herah of Jamaica wins the 200m gold in Tokyo to become the first female to win the 100/200 double in consecutive games.

1945 — Byron Nelson wins his 11th consecutive PGA Tour event, beating Herman Barron by four strokes. Nelson finishes the year with a record for most tournament wins (18) in a season.

1982 — Joel Youngblood becomes the only player in major league history to play and get hits for two different teams in two different cities on the same day. In the afternoon, his hit drives in the winning run for the New York Mets in a 7-4 victory at Chicago. After the game, he’s traded to the Montreal Expos and plays that night in Philadelphia. He enters the game in right field in the fourth inning and later gets a single.

1985 — Rod Carew of the California Angels gets his 3,000th hit in a 6-5 win over the Minnesota Twins, his first major league team.

1996 — Laura Davies shoots a 6-under 66 for a two-stroke victory over Nancy Lopez and Karrie Webb in the du Maurier Classic.

2011 — Cappie Pondexter scores 15 points to lead New York past Chicago 59-49, and the Liberty hold the Sky to a WNBA-record one point in the fourth quarter.

2012 — Michael Phelps wins another gold medal as the United States wins the medley relay at the London Olympics. Phelps leaves the sport with a record 18 golds and 22 medals overall. At these games, he wins four golds and two silvers.

2012 — Serena Williams beats Maria Sharapova 6-0, 6-1 to join Steffi Graf as the only women to complete the Golden Slam — winning the Olympics and the four majors. In a men’s semifinal match, Roger Federer outlasts Juan Martin del Potro in a 19-17 final set and clinches his first Olympic singles medal. Canadian equestrian Ian Millar rides into Olympic history by competing in his 10th games — the most of any athlete.

2013 — Missy Franklin claims her record sixth gold medal on the final day of the world championships in Barcelona, becoming the most successful female swimmer ever at a world meet. Franklin eclipses the record shared by Tracy Caulkins — who won five times in 1978 — and Libby Trickett, who did it in 2007.

2013 — Stacy Lewis wins the Women’s British Open after a marathon final day. Lewis finishes with a pair of birdies on the Old Course at St. Andrews and closes with an even-par 72. It’s her second major on the LPGA Tour, and it ends a record streak of 10 straight majors won by Asian players. Forced to play 36 holes, Lewis is the only player at par or better from the last 21 groups that tee off.

2018 — British swimmer Adam Peaty improves his own world record in the 100-meter breaststroke to 57.1 seconds at the European Championships in Glasgow, Scotland.

Global stocks lower after Fed says US inflation too high 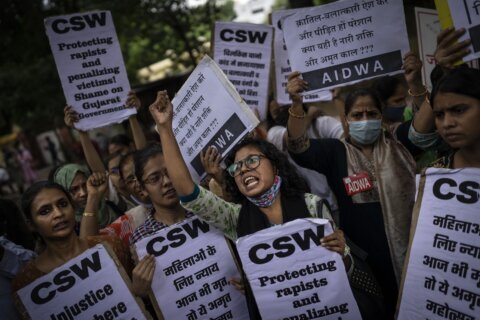