COLOMBO, Sri Lanka (AP) — Sri Lanka imposed a countrywide curfew starting Saturday evening until Monday morning, in addition to a state of emergency declared by the president, in an attempt to prevent more protests blaming the government for the worsening economic crisis.

The government’s information head Mohan Samaranayake said that the curfew is being imposed under powers vested with President Gotabaya Rajapaksa. He drew the ire of protesters who called for his resignation outside his residence on Thursday night, leading to police firing tear gas and arresting scores of people.

“The curfew is an attempt to shut the people up,” said Ruki Fernando, a human rights activist who headed to a protest in the capital, Colombo, which dispersed early after the curfew came into force.

“I don’t know why a curfew has been declared. What we need now is not a curfew, we need food, gas, fuel and the freedom to express ourselves,” Fernando said.

Rajapaksa assumed emergency powers on midnight Friday amid widespread calls for protests throughout the country on Sunday, as anger over shortages of essential foods, fuel and long power cuts boiled over this week.

Sri Lanka faces huge debt obligations and dwindling foreign reserves, and its struggle to pay for imports has caused a lack of basic supplies. People wait in long lines for gas, and power is cut for several hours daily because there’s not enough fuel to operate power plants and dry weather has sapped hydropower capacity.

The island nation’s economic woes date back a failure of successive governments to diversify exports, instead relying on traditional cash sources like tea, garments and tourism, and on a culture of consuming imported goods.

The COVID-19 pandemic dealt a heavy blow to the economy with the government estimating a loss of $14 billion in the last two years. Protesters also point to mismanagement — Sri Lanka has immense foreign debt after borrowing heavily on projects that don’t earn money. Its foreign debt repayment obligations are around $7 billion for this year alone.

The crisis has hit people from all walks of life. Middle class professionals and business people who would normally not take part in street protests have been holding nightly rallies with candles and placards in many parts of the country.

On Thursday, angry crowds demonstrated along the roads leading to Rajapaksa’s private residence on the outskirts of Colombo and stoned two army buses that police were using to block their path. The protesters set fire to one of the buses and turned back a fire truck that rushed to douse it.

Rajapaksa’s office blamed “organized extremists” within the thousands of protesters for the violence. Police fired tear gas and a water cannon and arrested 54 people. Dozens of other people were injured and some journalists beaten by police.

Senior police spokesperson Ajith Rohana said that 24 police personnel and several other civilians were injured. Total damage was estimated to be around $132,000 and the suspects will be charged with damaging public property, Rohana said.

Nuwan Bopage, who represents some of the suspects, said 27 were released on bail when they appeared in court on Friday night and the others were waiting to be processed.

The emergency declaration by Rajapaksa gives him wide powers to preserve public order, suppress mutiny, riot or civil disturbances or for the maintenance of essential supplies. Under the emergency, the president can authorize detentions, seizure of property and search of premises. He can also change or suspend any law except the constitution.

The Bar Association of Sri Lanka, the largest lawyers’ group, said the emergency declaration was not the answer to the country’s problems.

“These protests reflect the desperate situation of the people who are seeking to secure for themselves and their families some of the most basic essentials in life,” the lawyers said in a statement, urging Rajapaksa to revoke the emergency and ensure people’s rights to freedom of expression and peaceful assembly.

A curfew already had been implemented in the suburbs of Colombo following Thursday’s protests but was lifted Friday morning.

The powerful Rajapaksa family includes not only the president but his older brother, Prime Minister Mahinda Rajapaksa. He was credited with a military victory that ended the country’s 25-year civil war against Tamil rebels in 2009. Five other family members serve as lawmakers, including Finance Minister Basil Rajapaksa, Irrigation Minister Chamal Rajapaksa and a nephew, Sports Minister Namal Rajapaksa.

The Rajapaskas’ immense political clout has raised fears of the family control over key state functions and of weakening independent government institutions. 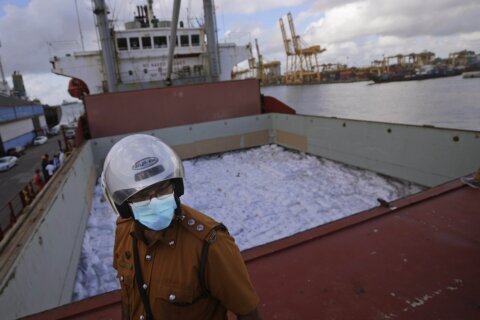