TOKYO (AP) — Asian shares were mixed in choppy trading Thursday, as inflation worries and the war in Ukraine had investors partly optimistic while staying cautious.

Benchmarks rose in Japan, South Korea and Australia, boosted by the overnight rally in Europe and in the Dow in the U.S. Investors were also watching South Korean trade numbers for April, which showed a trade deficit, although both imports and exports rose.

Chinese President Xi Jinping was speaking at a forum where Asian leaders talk about policy. Investors are watching to see if Xi will give any hint on changes to China’s COVID policies, according to Iris Pang, chief economist at ING.

What central banks may indicate on interest rates and inflation was also of concern, analysts said.

Wall Street’s major stock indexes ended mixed on a day dominated by the drop in Netflix shares, which lost more than a third of their value after reporting its first subscriber loss in more than a decade and predicting more grim times ahead.

The S&P 500 slipped 0.1% after a late-afternoon fade, while the Nasdaq fell 1.2%. The Dow Jones Industrial Average rose 0.7%, having received a bump from IBM, which added 7.1% after reporting quarterly results that beat analysts’ estimates.

Netflix slumped 35.1% a day after the streaming giant reported its first decline in subscribers in more than a decade. The company also said it expects a steeper decline during the current quarter. Netflix is now considering changes that it has long resisted, including minimizing password sharing and creating a low-cost subscription option supported by advertising. The stock is now down 67% from the all-time high it reached in November.

The skid in Netflix, one of Wall Street’s Big Tech high-flyers in recent years, weighed heavily on the S&P 500, outweighing gains elsewhere in the benchmark index, and hit the communication services sector the hardest, pulling it 4.1% lower.

“While it is in communication services, it is also a discretionary stock, clearly, in that it’s one of those things people buy because they want, not because they have to,” said Randy Frederick, vice president of trading and derivatives at Charles Schwab.

Technology stocks, retailers and other companies that rely on consumer spending also weighed on the market. Chipmaker Nvidia fell 3.2% and Amazon dropped 2.6%.

Tesla rose 4% in after-hours trading after reporting first-quarter net earnings that were over seven times greater than a year earlier. The electric vehicle and solar panel company benefited from strong sales despite global supply chain kinks and pandemic-related production cuts in China.

Investors continue focusing on the latest round of corporate earnings as they try to determine how companies are dealing with rising inflation and cost pressures. American Airlines and Union Pacific are due to report results on Thursday.

Inflation has been putting increasing pressure on a wide range of industries and increasingly squeezing consumers.

New Zealand’s inflation rate hit a 30-year high of 6.9%, driven by rapidly increasing costs for housing and gas. Statistics New Zealand reported that the cost of building new homes was up 18% when compared with a year ago, while gas prices were up 32%. The annual increase in prices was the highest since 1990, the agency said. Inflation has been rising in developed nations around the world, including in the U.S., where it hit a four-decade high of 8.5% in March.

Rising prices have prompted the Federal Reserve and other central banks to raise interest rates in order to help temper inflation’s impact. The Fed has already announced a quarter-percentage point rate hike and Wall Street expects a half-percentage rate hike at its next meeting in two weeks.

“The market knows the Fed’s going to hike rates a bunch,” said Scott Wren, senior global market strategist at Wells Fargo Investment Institute. “But, the market is feeling pretty good that once we get to neutral, then in 2023 maybe you don’t go a lot further.”

Interest rates are considered “neutral” when they neither push nor restrict economic growth. Currently, investors expect rate hikes to increase the benchmark interest rate to a range somewhere between 2.50% and 3% by the end of the year, according to CME Group’s FedWatch tool.

Bond yields have been rising throughout the year as Wall Street prepares for higher interest rates. The yield on the 10-year Treasury note eased to 2.84% from 2.91% late Tuesday, but it’s still near its highest level since late 2018.

Russia’s invasion of Ukraine and the ongoing conflict has only added to the worries about rising inflation crimping economic growth. The conflict has pushed energy and commodity prices higher.

Wheat prices are also up 41% for the year and that has the potential to increase prices for a wide range of food products globally.

This story corrects the time of the IMF panel discussion to Thursday, not Wednesday.

US expands probe of schemes against Chinese dissidents 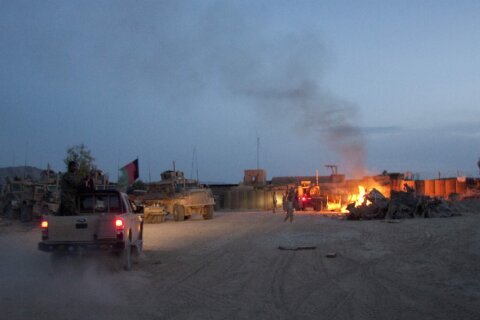