A NASA astronaut caught a Russian ride back to Earth on Wednesday after a U.S. record 355 days at the International Space Station, returning with two cosmonauts to a world torn apart by war.
Listen now to WTOP News WTOP.com | Alexa | Google Home | WTOP App | 103.5 FM
(1/18) 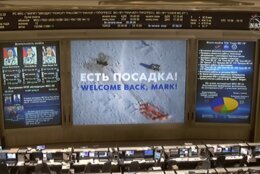 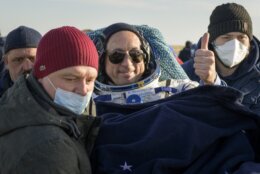 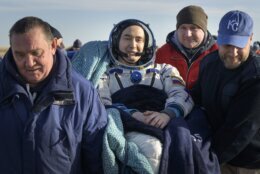 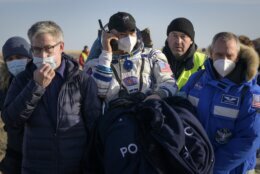 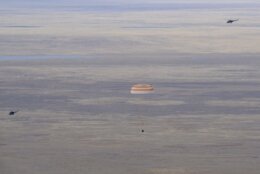 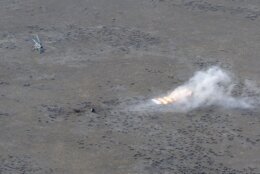 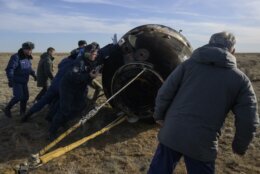 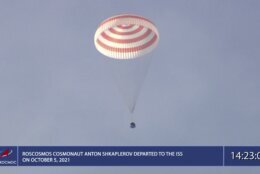 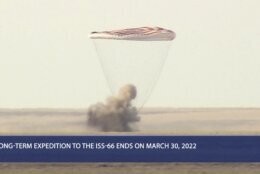 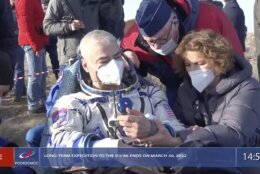 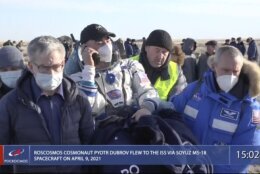 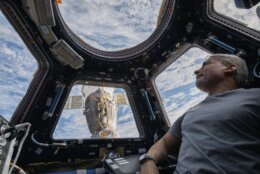 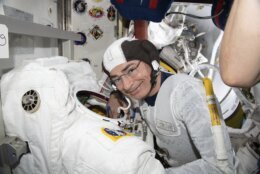 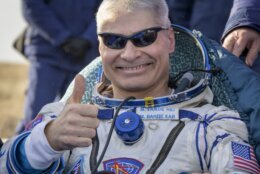 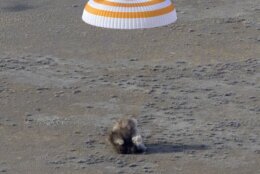 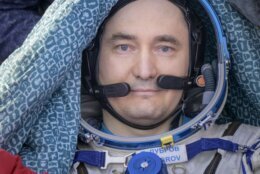 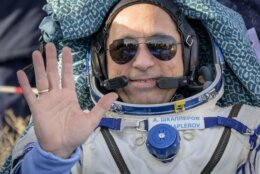 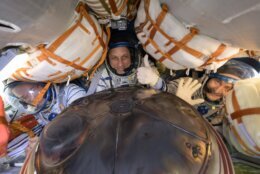 A NASA astronaut caught a Russian ride back to Earth on Wednesday after a U.S. record 355 days at the International Space Station, returning with two cosmonauts to a world torn apart by war.

Mark Vande Hei landed in a Soyuz capsule in Kazakhstan alongside the Russian Space Agency’s Pyotr Dubrov, who also spent the past year in space, and Anton Shkaplerov. Wind blew the capsule onto its side following touchdown, and the trio emerged into the late afternoon sun one by one.

Vande Hei, the last one out, grinned and waved as he was carried to a reclining chair out in the open Kazakh steppes.

“Beautiful out here,” said Vande Hei, putting on a face mask and ballcap.

Despite escalating tensions between the U.S. and Russia over Vladimir Putin’s war with Ukraine, Vande Hei’s return followed customary procedures. A small NASA team of doctors and other staff was on hand for the touchdown and planned to return immediately to Houston with the 55-year-old astronaut.

Even before Russia’s Feb. 24 invasion of Ukraine, Vande Hei said he was avoiding the subject with his two Russian crewmates. Despite getting along “fantastically … I’m not sure we really want to go there,” he said.

It was the first taste of gravity for Vande Hei and Dubrov since their Soyuz launch on April 9 last year. Shkaplerov joined them at the orbiting lab in October, escorting a Russian film crew up for a brief stay. To accommodate that visit, Vande Hei and Dubrov doubled the length of their stay.

Before departing the space station, Shkaplerov embraced his fellow astronauts as “my space brothers and space sister.”

“People have problem on Earth. On orbit … we are one crew,” Shkaplerov said in a live NASA TV broadcast Tuesday. The space station is a symbol of “friendship and cooperation and … future of exploration of space.”

The war tensions bubbled over in other areas of space with the suspension of European satellite launches on Russian rockets and the Europe-Russia Mars rover stuck on Earth for another two years.

Vande Hei surpassed NASA’s previous record for the longest single spaceflight by 15 days. Dubrov moved into Russia’s top five, well short of the 437-day, 17-hour marathon by a cosmonaut-physician aboard the 1990s Mir space station that remains the world record.

Like Kelly, Vande Hei underwent medical testing during his long stay to further NASA’s quest to get astronauts back to the moon and on to Mars. He said daily meditation helped him cope during the mission, twice as long as his first station stint four years earlier.

“I’ve had an indoor job 24-7 for almost a year so I am looking forward to being outside no matter what kind of weather,” Vande Hei said in a recent series of NASA videos. As for food, he’s looking forward to making a cup of coffee for himself and wife Julie, and digging into guacamole and chips.

Remaining on board: Three Russians who arrived two weeks ago and three Americans and one German, who have been aboard since November. Their replacements are due in three weeks via SpaceX. Next week, SpaceX will fly three rich businessmen and their ex-astronaut escort to the station for a weeklong visit arranged by the private Axiom Space.

Elon Musk’s SpaceX began transporting NASA astronauts to the station in 2020, nine years after the shuttle program ended. During that gap, Russia offered the lone taxi service, with NASA shelling out tens of millions of dollars per Soyuz seat. Vande Hei’s ride was part of a barter exchange with Houston-based Axiom.

Biden highlights Hyundai announcement of $10B US investment