HONG KONG (AP) — As a COVID-19 outbreak overwhelms Hong Kong, it’s hard for its 7.4 million residents to know what’s next.

Uncertainty is the only certainty as store shelves are stripped of goods, mainland Chinese companies throw up sprawling isolation and testing centers and the government sends mixed messages on whether it will lock down the population for a citywide mass testing.

Pandemic restrictions have sucked much of the energy out of a cosmopolitan city known for its neon lights and dense crowds. The latest closure, announced Wednesday, is public beaches. An overburdened health system means those who get infected often have to fend for themselves. And the death toll, particularly among the elderly, keeps rising.

“It’s a helpless situation,” said Wong Wing-tsang, a single mother who spent days trying to get a doctor’s appointment for her 10-year-old daughter who tested positive earlier this month. “We can only count on ourselves.”

After keeping the virus mostly at bay for nearly two years, Hong Kong authorities have been unable to bring under control an outbreak driven by the highly transmissible omicron variant. So many people have been infected that there aren’t enough drivers for the city buses and subways or clerks to keep some stores open.

Anxious residents have stockpiled daily necessities, as the government flip-flops on plans for mass testing and a possible lockdown. Infections among truck drivers interrupted shipments of meat and vegetables from mainland China, prompting worries of shortages and deliveries by sea.

“Honestly, I think government policies keep changing all the time and it’s hard for residents to follow,” said Alison Hui, a Hong Kong resident. “We don’t know if an announcement is real or not. It really makes us feel very worried.”

Last month, officials announced citywide, mass testing slated for March but said there were no plans for a lockdown. Days later, as cases surged, officials acknowledged that a lockdown was under consideration, prompting residents to wipe out supermarket shelves to stock up on food.

Then, two weeks after the February announcement, Hong Kong leader Carrie Lam said that the citywide testing had taken a temporary backseat as authorities focused on reducing the number of deaths and critical cases, but she didn’t say when the testing might happen.

That has changed with the fifth wave. Since it began at the end of December, over 760,000 infections have been reported, with more than 4,300 deaths. Mortuaries are so full that refrigerated containers had to be set up to store some of the bodies.

Many more infections are likely going unaccounted for as residents self-test with rapid antigen tests and isolate at home. Researchers at the University of Hong Kong estimated that nearly 3.6 million people — about half of the city’s population — have been infected as of March 14, based on modelling and data.

Lam, who has begun holding daily news conferences on the outbreak, said Wednesday that it appears to have peaked on March 3 and then showed a downward trend, though it has leveled off since last Friday.

Mainland authorities have helped build emergency hospitals and inflatable testing labs. “This is an unprecedented situation,” Lam said earlier, saying it had outgrown the capacity of the city government.

Wong, the single mother, said the only help she got from the government was a pack of five rapid antigen test kits. She sent her daughter to live with her mother-in-law, who was also infected, because there was no way to isolate at their home.

“I had no choice. I couldn’t let her isolate at home alone, and we don’t have enough bedrooms to separate us properly,” she said.

The pandemic has brought many businesses to their knees. Some restaurants, once again restricted to takeout and delivery after 6 p.m., have shuttered for good.

Many shops in malls have temporarily closed – some for lack of business, others because they are understaffed as workers have tested positive. Hair salons were allowed to reopen recently, but gyms and bars were ordered shut in January and won’t reopen until after mid-April at the earliest.

Fewer subway trains and buses are running as hundreds of employees contract the coronavirus. Some multinational companies have relocated outside of Hong Kong, while others have temporarily sent senior executives elsewhere amid the uncertainty.

Mak Sin Chang, a Singaporean who has lived in Hong Kong for eight years, said he would consider leaving if he got a job elsewhere. He said the government should offer a road map for exiting the pandemic so people could see light at the end of the tunnel.

“Now we are all living in darkness, guided by the blind,” he said.

It’s a major setback from late last year, when Hong Kong had gone months without any locally spread cases and was working to get the quarantine requirement in mainland China lifted for people entering from Hong Kong.

“Everything was really starting to look up by the end of 2021, because we were looking forward to opening up with China,” said Francis Lun, an investment manager and a veteran market commentator. “But all of a sudden, the omicron hit, and it’s completely out of control now.”

After two years, he said, “there’s no end in sight.” 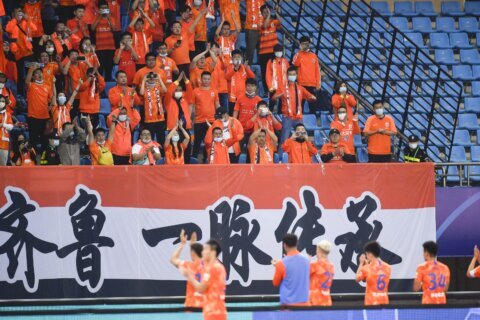