US, Germany support Lithuania in spat with China over Taiwan

WASHINGTON (AP) — The United States and Germany on Wednesday backed Lithuania in its spat with China, saying the pressure exerted by Beijing against the tiny Baltic nation was unwarranted,

Lithuania broke with diplomatic custom last year by letting the Taiwanese office in Vilnius bear the name Taiwan, instead of Chinese Taipei, which most other countries use to avoid offending Beijing.

China considers Taiwan part of its territory with no right to diplomatic recognition, and Lithuania’s move infuriated Beijing, which withdrew its ambassador to Vilnius and expelled the Lithuanian ambassador to Beijing.

“We have immediate concern about the government of China’s attempts to bully Lithuania, a country of fewer than 3 million people,” U.S. Secretary of State Antony Blinken said after a meeting in Washington with his German counterpart.

Blinken said China had been pushing European and American companies to stop building products with components made in Lithuania or risk losing access to the Chinese market.

“This isn’t just about Lithuania, but about how every country in the world should be able to determine its own foreign policy free from this kind of coercion,” he said, adding that the U.S. would work with its allies to diversify supply chains and counter “all forms of economic blackmail.”

Germany’s foreign minister, Annalena Baerbock, said that “we as Europeans stand in solidarity at Lithuania’s side.”

The EU’s top trade official said last month that the bloc would stand up to coercive measures imposed on its member state Lithuania, citing reports of Chinese customs blocking imports from the country. Valdis Dombrovskis, a European Commission vice president from Latvia, said if necessary the EU would take up the issue at the World Trade Organization. 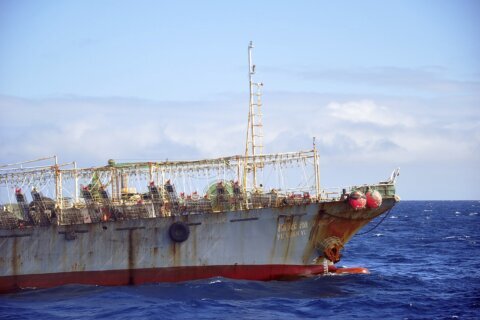