BEIJING (AP) — China further tightened its anti-pandemic measures in Beijing and across the country on Friday as scattered outbreaks continued ahead of the opening of the Winter Olympics in a little over two weeks.

The actions appear to reflect nervousness about a possible surge in cases ahead of the Beijing Games.

Beijing has ordered children at international schools to be tested starting next week and is barring air passengers who transited via a third point. Citizens are being told only to travel if absolutely necessary, with no guarantee they will be permitted to return if found to have visited a city or region where an outbreak occurred.

The city of Tianjin, about an hour from the capital, has ordered a third round of mass testing starting Saturday morning to be completed within 24 hours.

A port and manufacturing center with 14 million people, Tianjin is one of a half dozen cities where the government is imposing lockdowns and other restrictions as part of a policy to track down every virus case.

It’s proximity to Beijing is particularly worrying and authorities have cut off all travel links between it and the Olympic host city following the discovery of 126 cases in recent days, all apparently of the highly contagious omicron variant.

Elsewhere, more than 20 million people are under lockdown, many restricted to their homes amid concerns over supplies of food and other daily necessities. Factories have been closed, affecting supplies of computer chips and other products.

Automaker Volkswagen AG said it shut down two factories in Tianjin on Monday and employees have been tested twice.

In the northern city of Xi’an, where a lockdown was imposed its 14 million people on Dec. 23, residents have been told their credit scores won’t be affected if they are unable to make loan payments on time while in quarantine.

Even the city of Zhuhai in the far south has suspended flights to Beijing and bus service with the Guangdong provincial capital of Guangzhou.

Zhuhai has ordered citywide testing and barred residents from leaving without good reason and a negative COVID-19 test, despite the National Health Commission reporting no cases of local transmission in the city, which lies just across the border from the gambling mecca of Macao.

China has also banned dozens of overseas flights from Europe, Canada, the U.S., Indonesia and elsewhere after passengers tested positive for the virus upon arrival.

The financial hub of Shanghai, which has recorded relatively few cases, has also suspended some travel links.

China has imposed such sweeping restrictions on movement repeatedly since early 2020, soon after the virus was first detected in the central city of Wuhan.

Along with mass testing and digital surveillance of people’s movements, the measures have kept the virus from spreading into a full-fledged national outbreak so far. The country’s vaccination rate now also tops 85%.

Other countries that tried a similar zero-tolerance approach have abandoned it, deciding instead to try to live with the virus, while mitigating its worst effects.

China’s economy grew by 8.1% in 2021 after activity slowed as Beijing moved to cut corporate debt 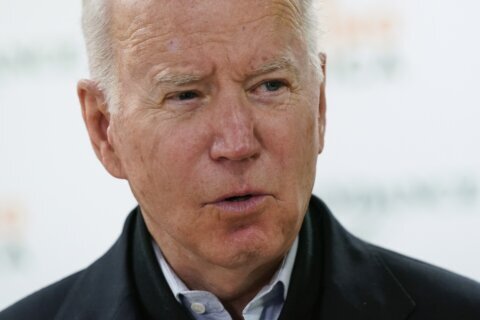