2-time US champ, Olympic hopeful Liu out with COVID-19

NASHVILLE, Tenn. (AP) — Two-time champion Alysa Liu withdrew from the U.S. Figure Skating Championships after testing positive for COVID-19 on Friday, less than a day after a third-place finish in the short program put her in position to make the Olympic team.

The 16-year-old Liu is at least the fifth competitor to test positive for the virus in the run-up and during nationals, and the third that was expected to make the team for the Beijing Games. The pairs tandem of Alexa Knierim and Brandon Frazier dropped out the day before the start of competition when he returned a positive test.

“I’m fully vaccinated, have been wearing a n95 mask and got 2 negative test results before leaving to Nashville,” Liu posted on her Instagram account shortly after withdrawing. “Things happen unfortunately.”

Amber Glenn also withdrew after a positive test, the announcement coming about an hour before she was to take the ice on Friday night. Glenn arrived with an outside shot at the Olympics but struggled through her short program.

“This breaks my heart since I’ve trained so hard and have been so careful,” said Glenn, who posted a photo of her two positive tests on Instagram. “I have been blaming myself for being so off and just not me during yesterday’s performance and was so confused to how I could’ve felt the way I did. To know I was competing while sick with COVID is awful.

“It scares me to think who might’ve been exposed to me.”

Indeed, most stressing to those competing is the fact that several skaters were in close contact with Liu and Glenn on Thursday night. Mariah Bell and Karen Chen, both of whom are vaccinated, even shared a dais with Liu for interviews after the short program, though they were separated by several feet and all wore masks.

But Bell and Chen were available for Saturday night’s free skate, which Bell won or her first national championship. Chen was second, and both will be headed to the Olympics.

Liu’s positive test came back during a routine test all skaters, coaches and other staff are required to take four days after arriving in Nashville. She had not been displaying any symptoms during practice this week.

U.S. Figure Skating is now going through a contact-tracing process in accordance with CDC recommendations.

Liu said she was thankful to U.S. Figure Skating for “taking the extra precaution and having necessary testing facilities to help keep everyone here as safe as possible.” She added that she felt good “physically and mentally.”

Liu has long been considered the best hope for an American woman to stand alongside the Russians on the podium in Beijing. The youngest skater ever to win the U.S. championship is one of the few with the ability to land a clean triple axel, though she fell during the short program on what is considered by far the most difficult triple jump.

“I don’t really think about beating others in competition. When you say, ‘Beat the Russians,’ that’s not my goal,” Liu said. “My goal is to skate how I want to skate. And I feel like that’s just my goal.”

Leave it to the rest of the close-knit skating world to hype Liu instead. It began when she triumphed at nationals in 2018, breaking Tara Lipinski’s record for the youngest winner at 13 years old. And while she was too young to compete at the Pyeongchang Games that year, it was clear that Liu had her sights set on competing in Beijing.

Now, those hopes rest in the hands of a selection committee that will make their decision on Saturday.

So do those of Knierim and Frazier, who were the favorites to win pairs gold in Nashville. The pair won the title last year, when the pandemic prevented any fans from attending nationals in Las Vegas, and Knierim is aiming for another Olympic team after competing with her husband Chris Knierim in Pyeongchang.

“I am devastated,” Frazier said. “Any athlete would agree with me, you always want to have the ability to go out and compete. This has been one of the most emotional days of my career. There’s nothing you can do, you have to be safe and smart, but the competitor in you wants to go out and compete and defend your title.” 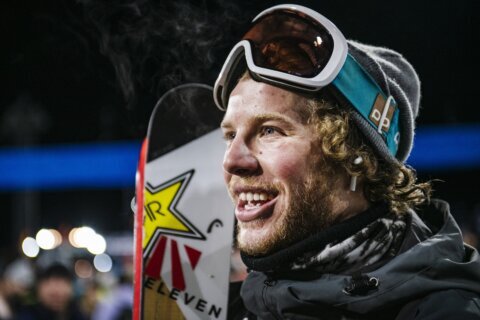