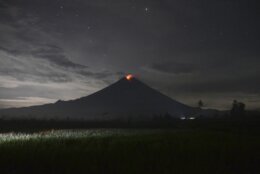 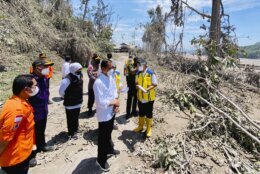 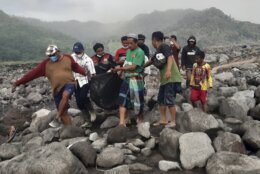 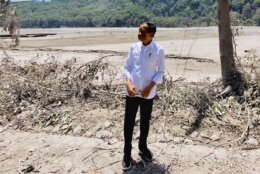 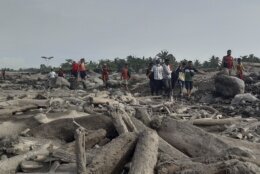 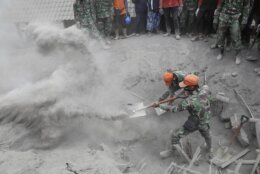 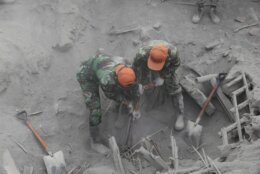 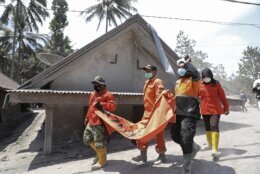 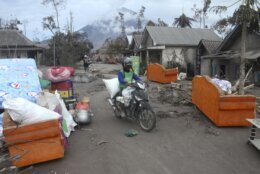 LUMAJANG, Indonesia (AP) — Indonesia’s president on Tuesday visited areas devastated by a powerful volcanic eruption that killed at least 34 people and left thousands homeless, and vowed that communities would be quickly rebuilt.

Clouds of hot ash shot high into the sky and an avalanche of lava and searing gas swept as far as 11 kilometers (7 miles) down Mount Semeru’s slopes in a sudden eruption Saturday triggered by heavy rain. Villages and towns were blanketed by tons of volcanic debris.

President Joko Widodo visited eruption-hit areas in Lumajang district in East Java province to reassure people that the government’s response is reaching those in need.

After visiting survivors in shelters on a soccer field, he pledged to rebuild infrastructure, including the main bridge connecting Lumajang to other cities, and move about 2,970 houses out of danger zones.

Officials earlier said residents of the hardest-hit villages will be relocated within the next six months, and each family waiting for a new house will be provided 500,000 rupiah ($34.50) per month in compensation.

National Disaster Mitigation Agency spokesperson Abdul Muhari said more than 100 people were hospitalized after the eruption, 22 of them with serious injuries, mostly burns. He said rescuers are still searching for 22 villagers reported missing. Nearly 3,000 houses and 38 schools were damaged, he said.

The number of dead and missing is expected to rise as much of the search area is mountainous and “geographically difficult,” said Andris Rufianto Putro, a field coordinator for Semeru emergency response at Indonesian Red Cross.

His teams retrieved on Tuesday five bodies from the rubble of a home in the hamlet of Renteng, and two others found dead nearby, most of them in a burned state. Five other bodies were found in the neighboring village of Supiturang.

The filed coordinator said some search areas could only be reached by a tracked articulated vehicle that operate on the rugged and wrecked terrain — such as “Hagglund” vehicles.

The eruption of the 3,676-meter (12,060-foot) mountain eased pressure that had been building under a lava dome in its crater. But experts warned that the dome could further collapse, causing an avalanche of blistering gas and debris trapped beneath it.

Relief workers struggled Tuesday to clear tons of volcanic debris, and focused on three locations in the worst-hit village of Sumberwuluh, where people are still believed trapped in houses that were buried to their rooftops, said Wayan Suyatna, who heads the local search and rescue agency.

“The volcanic ash deposits are still at high temperatures, and the deeper we dig the hotter it gets,” Suyatna said.

Semeru, also known as Mahameru, has erupted many times in the last 200 years. Still, as on many of the 129 volcanoes monitored in Indonesia, tens of thousands of people live on its fertile slopes. It last erupted in January, with no casualties.