PHNOM PENH, Cambodia (AP) — An autistic Cambodian teenager vowed Wednesday to continue to fight for his father’s freedom after completing his own prison sentence for social media comments critical of the government in a case that has attracted international attention.

Kak Sovannchhay, 16, pumped his right arm in the air saying “Long live Cambodia” to supporters while hugging his mother after he walked out of the Prey Sar prison on the outskirts of Phnom Penh.

He clutched a bouquet of red roses and lilies tightly to his chest and smiled shyly as reporters snapped photos of him.

Kak Sovannchhay had been in custody since June, when he was arrested for comments he made in a Telegram chat group defending his father, a senior member of the opposition Cambodia National Rescue Party who is in custody facing charges, and for sharing Facebook posts criticizing Prime Minister Hun Sen.

His father, Kak Komphear, has been in detention since May 2020 and his mother, Prum Chantha, is a member of the group Friday Wives, who hold protests to demand the release of their husbands who have been jailed for expressing views critical of Hun Sen’s government.

Kak Sovannchhay told reporters that he was excited to be free but that he would keep defending his father and his beliefs.

Hun Sen has been in power for 36 years and has often been accused of heading an authoritarian regime and using the judicial system to stifle opposition.

United Nations human rights experts have accused the Cambodian government of “weaponizing” its court system in Kak Sovannchhay’s case to silence dissent. U.S. Ambassador to Cambodia W. Patrick Murphy questioned the decision to sentence “a child to prison time for what appears to be politically motivated charges.”

The Phnom Penh Municipal Court has defended its verdict, saying the teenager had previously been in trouble for online comments. It also noted that his age was taken into consideration in reducing his jail time, and that it had received no medical confirmation of his autism during the trial and said that he appeared to follow the proceedings.

Human Rights Watch deputy Asia director Phil Robertson said it was “absolutely outrageous and unacceptable that this autistic boy was arrested and imprisoned in the first place.”

“The case further deepens the reputational damage to Cambodia’s courts and prosecutors, who once again showed themselves bereft of any sense of justice in political cases prioritized by the government,” he said in an email to The Associated Press.

Kak Sovannchhay’s trial concluded Oct. 13 but the court only announced its verdict last week, convicting him of incitement to commit a felony and public insult.

He was sentenced to eight months in prison but was released under sentencing guidelines that include credit for time served.

His mother said even though she is happy that her son is now free, she worries that the conviction will loom over him and that her lawyer is looking into an appeal to keep fighting the charges.

In the meantime, she said she plans to have him resume school but has concerns.

“I don’t know if he will be harassed or not by other students when he goes back,” she said. 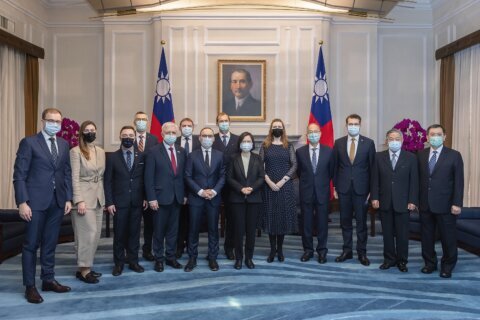