BEIJING (AP) — Asian stock markets were mixed Tuesday after Wall Street rose to a record for an eighth day.

Also Monday, the deputy chairman of the Federal Reserve, Richard Clarida, said conditions to raise interest rates might not be met until late 2022. Traders worry a spike in inflation might prompt central banks to withdraw stimulus that helped to boost stock prices.

“Investors will be on the lookout for any clues that signal an adjustment to central banks’ taper process and rate hikes expectations,” Anderson Alves of ActivTrades said in a report.

Also Tuesday, Japan’s government reported wage growth fell to a three-month lost of 0.2% over a year earlier in September.

Investor worries about inflation have been soothed by stronger corporate profits.

Advanced Micro Devices jumped 10.1% for the biggest gain in the S&P 500 after announcing Facebook parent company Meta would use AMD chips in its data centers. Chipmaker Nvidia rose 3.5%.

Steelmakers and other companies that stand to benefit from increased infrastructure spending also rallied following Congress’ passage of the infrastructure bill. Nucor gained 3.6%.

The Labor Department is due to report wholesale inflation Tuesday and consumer inflation Wednesday.

In energy markets, benchmark U.S. crude oil lost 8 cents to $81.85 per barrel in electronic trading on the New York Mercantile Exchange. The contract rose 66 cents on Monday to $81.93. Brent crude, the price basis for international oils, shed 18 cents to $83.25 in London. It 69 cents the previous session to $83.43 per barrel. 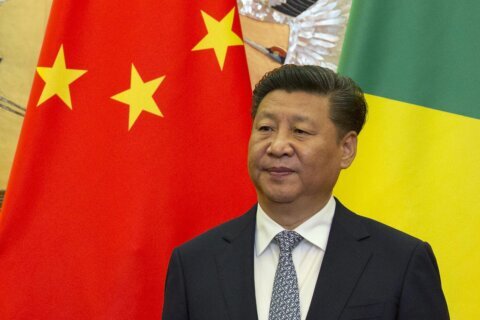