In Afghanistan, a girls’ school is the story of a village

SALAR, Afghanistan (AP) — Mina Ahmed smears a cement mixture to strengthen the walls of her war-ravaged home in rural Afghanistan. Her hands, worn by the labor, are bandaged with plastic scraps and elastic bands, but no matter, she welcomes the new era of peace under the Taliban.

She was once apprehensive of the group’s severe style of rule in her village of Salar. But being caught in the crosshairs of a two-decade long war has granted her a new perspective.

Taliban control comes with limits, even for women, and that is alright, the 45-year-old said. “With these restrictions we can live our lives at least.”

From a bird’s eye view, the village of Salar is camouflaged against a towering mountain range in Wardak province. The community of several thousand, nearly 70 miles from the capital Kabul, serves as a microcosm of the latest chapter in Afghanistan’s history — the second round of rule by the Taliban — showing what has changed and what hasn’t since their first time in power, in the late 1990s.

Residents of Salar, which has been under Taliban hold the past two years, are embracing the new stability now that the insurgents’ war with the U.S. military and its Afghan allies is over. Those displaced by fighting are returning home. Still, they fear a worsening economic crisis and a drought that is keenly felt in a province where life revolves around the harvest.

In Kabul and other cities, public discontent toward the Taliban is focused on threats to personal freedoms, including the rights of women.

In Salar, these barely resonate. The ideological gap between the Taliban leadership and the rural conservative community is not wide. Many villagers supported the insurgency and celebrated the Aug. 15 fall of Kabul which consolidated Taliban control across the country.

But even in Salar, changes are afoot, beginning with the villagers’ insistence on their local elementary school for girls.

That insistence helped push the Taliban to accept a new, small school, funded by international donors. But what the school will become — a formal public school paving the way to higher education, a religious madrasa, or something in between — is uncertain, like the future of the village and the country.

By 8 a.m., 38 small faces framed by veils are seated on a carpeted floor looking up at their teacher, Qari Wali Khan. With a stick in hand and furrowed brow, he calls on the girls to recite from the Quran.

Rokia, 10, is the unlucky first. Merely three words of classical Arabic escape her lips when Wali Khan interrupts, correcting her pronunciation. When she repeats again, he exclaims, “Afarin!” — “Excellent,” in Pashtu.

In three hours, the students, ages 9-12, will cover Quranic memorization, mathematics, handwriting, and more Islamic study. Homework: What is 105 x 25?

The school opened two months ago, marking the first time in 20 years girls in the village have ever stepped foot in a classroom, or something like it. In the absence of a building, lessons are held in Wali Khan’s living room.

The classes are the product of U.N. negotiations with the Taliban.

In 2020, the U.N. began working on a program to set up girls’ learning centers in conservative and remote areas, including ones under Taliban control at the time, like Sayedabad district where Salar is located.

Taliban interlocutors were initially reluctant to embrace the idea, but an agreement was eventually reached in November 2020, said Jeanette Vogelaar, UNICEF’s chief of education. International funding was secured, $35 million a year for three years to finance 10,000 such centers.

Launch was delayed by COVID-19. By the time centers were scheduled to open, the Taliban had taken over in Kabul. To everyone’s surprise, they allowed the project to go ahead, even using the previous government’s curriculum — though they have introduced more Islamic learning and insisted on gender segregation and female teachers.

Wali Khan, a madrasa teacher by training, got the job in Wardak because most educated women had left for the capital.

The program enables girls without formal schooling to complete six grades in three years. When completed, they should be ready to enter Grade 7.

It remains unresolved whether they can continue after that. In most districts, the Taliban have prohibited girls ages 12-17 from going to public school.

Still, it’s a good start, Vogelaar said. “Based on what we see now, somehow the Taliban doesn’t seem to be the same as how they behaved before,” she said.

Ten years ago, the Taliban were at the forefront of a deadly campaign targeting government officials in Wardak, with particular venom reserved for those campaigning for girls’ schools. Two village elders recounted the shooting death of Mirajuddin Ahmed, Sayedabad’s director of education and a vocal supporter for girl’s’ access to education.

Several public girls’ schools were burned down in 2007 in the province. To this day, not a single one stands.

“If they don’t allow girls to go to this school now, there will be an uprising,” said village elder Abdul Hadi Khan.

“They put their trust in me, they told me, this is a need in our society,” he said.

That might be one reason why the Taliban decided to cooperate; with the economy in ruins, they could not risk alienating a constituency that supported them throughout the insurgency.

There are concerns of how much the Taliban will shape the schooling. The U.N. is aware the Taliban enter villages and insist on more Islamic study, said Vogelaar.

Most families are not against it, either. Sayedabad district is composed primarily of Afghanistan’s dominant Pashtun ethnic group, from which the Taliban are mostly drawn. Religion and conservatism are central to daily village life.

But a madrasa-type education “was not the intention,” said Vogelaar.

Wali Khan said he received specific orders from the Taliban-controlled education directorate in Sayedabad to “include more religious study” in the curriculum. He obeyed.

In late October, local Taliban officials came to visit Wali Khan. They wanted to know how the classes were going.

“The girls have a hunger to learn,” he told them.

After class, 12-year-old Sima runs home, whizzing past Salar’s mud-brick houses, a cloud of dust in her wake.

Her father, Nisar, is away picking tomatoes in the fields for 200 afghanis ($2.5) a day. He is their only breadwinner.

Mina expects it will be a long time before her home is in one piece again.

She’s rebuilding bit by bit, buying cement bags for the equivalent of $1 whenever she can. She has accumulated some 100,000 afghanis ($1,100) in debt to relatives and friends.

The family returned home just a month ago. Only one of the house’s four rooms was usable. Walls are still riddled with bullet holes.

They had fled more than 11 years earlier, moving to the other side of the village where it was safer. Their home was too dangerous, located on a strategic incline overlooking Highway One, which connects Kabul to the south and was a hotbed of insurgent activity throughout the war.

She remembers standing out in the cold as American troops inspected their house for insurgents. By 2007, ambushes of army convoys on the highway became frequent. Many times, Mina saw army tanks burst into flames from her kitchen window. She has lost two brothers-in-law.

The ruins of an army checkpoint lie above Mina’s home. The Afghan army held it for 18 years, until the Taliban took over the area decisively two years ago.

Mina has made slow progress with the house but fears what will happen as temperatures drop and market prices rise.

Afghanistan is grappling with an economic crisis after the U.S. froze Afghan assets in line with international sanctions against the Taliban. Foreign aid that once accounted for 75% of state expenditure has also paused.

Mina has six children and they all need to be fed, she said.

Everyone who has returned has a similar story.

“You won’t find one person in this village who is in a good situation,” said Mahmad Rizak, 38, standing outside his home with a face flecked with cement.

Food shortages are taking a toll. The Mohammed Khan Hospital, the only one in the district, is struggling with a rising number of malnourished newborns wailing in the maternity ward.

In the surgical ward, an unusual museum of mementos hangs on the wall. It consists of bullets and kidney stones removed from patients — the first from the war, the second from poor water quality.

“Tells you everything about this place,” said Dr. Gul Makia.

Drought has decimated the harvest, leaving many whose lives revolve around tilling the earth and raising livestock with no means to make a living.

When October ends, so does tomato-picking season, and Nisar will be out of work.

He joins his wife in mixing cement.

He points to the room once occupied by Afghan soldiers, and then Taliban insurgents after them. “My daughter will become a teacher one day, and we will make this into a school for her to educate other girls.” 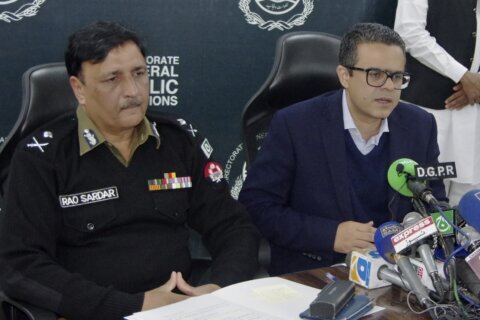