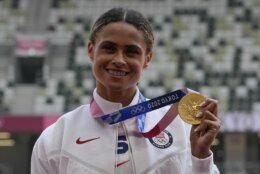 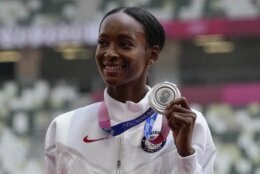 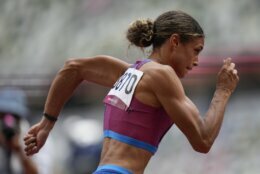 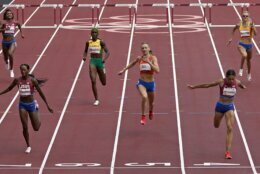 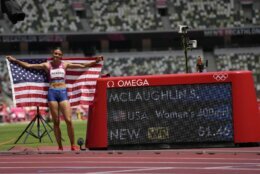 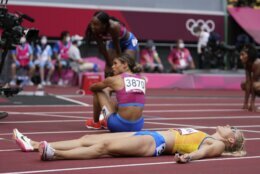 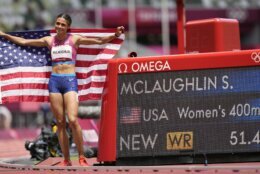 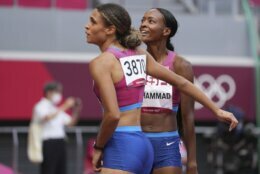 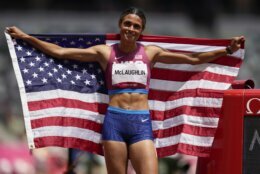 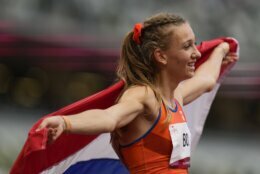 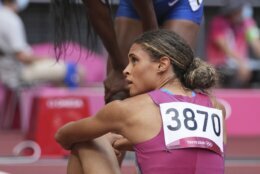 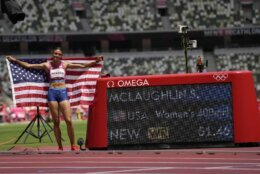 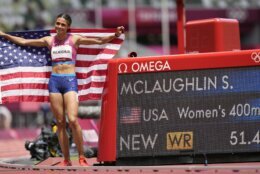 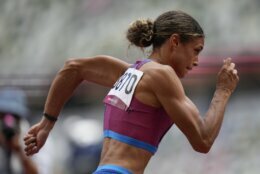 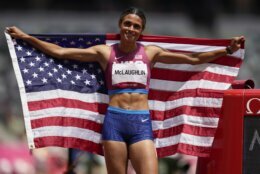 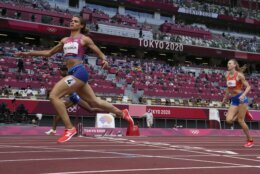 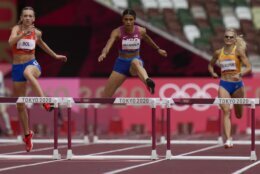 Only one of the world’s best hurdlers could win the Olympic gold medal — and McLaughlin came out ahead in the latest installment of the best rivalry in track.

The 21-year-old from New Jersey won the 400-meter hurdles title Wednesday, finishing in 51.46 seconds in yet another history-making day on the speedy Olympic oval.

“Iron sharpening iron,” McLaughlin called the latest in her series of showdowns with Muhammad, each one faster than the last. “Every time we step on the track, it’s always something fast.”

McLaughlin came from behind after the last hurdle to top the defending Olympic champion. Muhammad’s time of 51.58 also beat McLaughlin’s old record of 51.9, set at Olympic trials in June. But in this race, it was only good enough for the silver.

For McLaughlin, it was a muted celebration — in part, because traversing 400 meters while clearing 10 hurdles at 17 miles-per-hour is more exhausting than she makes it look.

“There was some lactic” acid building up, she said.

She sat on the ground, gave a serious look toward the scoreboard — yep, it’s a record … again — then got up and moved toward the hand-sanitizing station. Muhammad came over and gave her a congratulatory hug. They’ll meet again. World championships are next July.

“No mixed emotions,” Muhammad said. “Sure, there are always things you want to do better. But you use this as a springboard to the next. This is not my last race.”

Impressive as McLaughlin’s race was, this record didn’t really surprise anyone.

McLaughlin and Muhammad, a New York City native who went to Southern Cal, have been trading the record, and the wins, for two years. Muhammad first broke the mark at U.S. Nationals in Des Moines, Iowa, in 2019, then lowered it to 52.16, at the world championships in Qatar.

McLaughlin broke that record earlier this summer at Olympic trials, running 51.9 to become the first woman to crack 52 seconds.

It felt inevitable that the mark would go down again on a fast track in perfect, hot-and-humid running conditions in Tokyo.

It was a lot to live up to for the M&M duo, whose race was even more eagerly anticipated. They exceeded expectations, and left everyone else in the race behind.

“I just went out like crazy for the first 300 to be with them,” said bronze medalist Femke Bol of the Netherlands, who set a European record and whose time of 52.03 would’ve been a world record six weeks ago. “And I died a bit.”

Starting from Lane 7, Muhammad came out of the blocks and made up the lag quickly — too quickly? — as they cruised down the backstretch.

Slowly, steadily, McLaughlin drew even, and they were at nearly a draw when they reached the final 100 meters. As McLaughlin and Muhammad scaled the last hurdle, it was McLaughlin who moved ahead and started inching away.

The .12-second margin was close — but not as close as in Doha, when McLaughlin lost by .07 in a race that changed her thinking.

That world championship race showed how good McLaughlin really was, but left her with an undisputable reality. Muhammad, now 31 and a late bloomer who didn’t have a sponsor or a spot at the London Olympics in 2012, was better.

McLaughlin changed coaches, joining Bobby Kersee, whose expertise has helped produce what could be a wing of a track and field Hall of Fame: Jackie Joyner-Kersee, Florence Griffith Joyner, Allyson Felix.

“This is his 11th Olympics he’s coaching, you know he’s been around the block a few times,” McLaughlin said of Kersee. “And he knew exactly what it was going to take to get me to this point.”

Kersee had McLaughlin work at shorter distances, jump off the opposite foot, run indoors more and just get used to different situations. They also worked on staying focused.

Nothing seemed to bother her in Tokyo — not the quarantine rules, the early wake-up times (4 a.m. for the first round) or a drenching rainstorm that hit during the semifinals.

Neither did the expectations of the Olympics or the race. That sort of spotlight has hindered other Olympians. Along with Kersee, McLaughlin credited her faith for helping her cut through the pressure to focus on the race.

“I think it’s a weight that you put on yourself that doesn’t really exist,” she said. “It’s the fear of something that hasn’t happened yet in your mind that you’re assuming has already happened. It’s really just making sure that your thoughts are positive.”

Her gold medal was proof that her mindset had worked.

It’s also the latest in a journey she’s been on since she burst onto the international scene in 2016. She was 16, one of the freshest faces in sports, and she came to Olympic trials with stories of how she could juggle, and ride a unicycle, and do both at the same time.

She earned a spot on the U.S. Olympic team in one of the most stacked events on the program, Muhammad, already in her prime, won a gold medal in Rio de Janeiro. McLaughlin was out in the semifinal round. A great learning experience.

She had the good fortune to come of age at a time when another woman was redefining the hurdles game.

Before Muhammad broke it, the world record had stood at 52.34 for 16 years.

“I told Dalilah all the time, it’s a little soft. I think we can go faster,” said her coach, Boogie Johnson. “She’s like, ‘You think so?” I’m like, ’Yeah, if we do this, this and this.’ We just changed the mindset.”

Once an undercard on the track and field schedule, the 400-meter hurdles is now one of the best races at the Olympics.

McLaughlin won it this time.

Muhammad is back to the drawing board.

“I think it’s two athletes wanting to be their best,” McLaughlin said, “and knowing there’s another great girl who’s going to help you get there.”