Two Russian rowers out of Olympics after failing drug tests

MOSCOW (AP) — Two Russian rowers have been removed from the squad for the Tokyo Olympics after failing drug tests, Russian officials said Wednesday.

Russian Olympic Committee president Stanislav Pozdnyakov told the Tass state news agency that the two rowers had been provisionally suspended and replaced in the team before the final Olympic squad was announced.

Pozdnyakov said that the Russian rowing federation “must take all comprehensive measures to ascertain the circumstances of this incident, which can only be called outrageous.”

Federation president Alexei Svirin named the rowers as Nikita Morgachev and Pavel Sorin from the quadruple sculls crew in comments to state news agencies Tass and RIA Novosti. The 40-year-old Morgachev competed at the Olympics in 2008, 2012 and 2016. Sorin was heading into his first Olympics.

Svirin said they tested positive for the banned substance meldonium during a training camp on June 17. Meldonium was widely used in Russia and Eastern Europe as a sports supplement until it was added to the banned list in 2016.

Tennis player Maria Sharapova served a 15-month ban after testing positive for meldonium in 2016 and curler Alexander Krushelnitsky was stripped of a bronze medal at the 2018 Winter Olympics after it was found in his sample.

Russian athletes in Tokyo will officially compete under the designation “ROC”, an abbreviation for Russian Olympic Committee. That’s because Russia’s name, flag and anthem are barred from the games following a Court of Arbitration for Sport ruling on data from the former Moscow anti-doping laboratory. 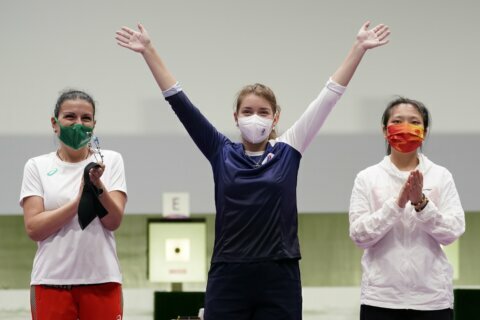