WIMBLEDON, England (AP) — Naomi Osaka was not the first professional tennis player to withdraw during a Grand Slam tournament because of mental health concerns — and she likely won’t be the last. Others just might not always be as up-front as Osaka was.

“I’m sure there’s quite a few people struggling. More than we know,” said U.S. Davis Cup captain Mardy Fish, who pulled out of the 2012 U.S. Open when he had a panic attack before he was supposed to face Roger Federer. “There have been plenty of players that have had some mental health issues, whether you know it or not. I have spoken to many players over the last eight or nine years that you’ve heard of — some up-and-coming players; some college players; male and female — that have struggled with that type of stuff. It is prevalent in sports and certainly prevalent in such an individual sport.”

In video or telephone interviews during Wimbledon, which ends Sunday, and the French Open, which finished in June, current and former players said they think their sport might be particularly prone to issues such as stress, anxiety and depression.

It is, after all, mostly a solo sport with an itinerant lifestyle, no guaranteed salary and the constant thumbs-up-or-thumbs-down (usually the latter for most players) judgments based on results and rankings.

There aren’t teammates to rely on. There aren’t days off for “load management.” Players can’t even get in-match coaching at most tournaments.

“If you wake up on the wrong side of the bed, if you don’t feel well, there’s no, ‘Hey, I’m not going to play this game today,’” said Fish, who reached No. 7 in the rankings, made three Slam quarterfinals and won an Olympic silver medal. “And you’ve got to trek it all by yourself.”

It’s been amplified lately because of the pandemic.

“Sometimes it’s not prioritized. Sometimes it’s the last thing that you think of. But especially in tennis, the mind is so important. … We travel so much and we’re alone, so it can really take a toll on you mentally,” said Jennifer Brady, a 26-year-old from Pennsylvania who was the runner-up to Osaka at the Australian Open in February and is on the U.S. team for the Tokyo Games.

“I keep a lot of things to myself, and over time, it can just create a big snowball. And then, at one point, you just kind of explode, and you’re like, ‘Whoa. Where did that come from?’ But really it’s just a build-up of everything,” said Brady, who uses a sports psychologist. “And there’s always a breaking point for everyone.”

Osaka brought attention to the topic in late May, when she pulled out of the French Open before the second round, saying she has “huge waves of anxiety” before speaking to the media and that she has “suffered long bouts of depression.” She took a mental health break and sat out Wimbledon; her return is planned for the Olympics, which are scheduled to begin in two weeks with zero fans amid a state of emergency in Japan.

Osaka, 23, has won four Grand Slam titles, been ranked No. 1 and is the world’s highest-earning female athlete.

In an essay for Time magazine, she wrote that she hopes “we can enact measures to protect athletes, especially the fragile ones,” and said: “Each of us, as humans, is going through something on some level.”

Hers is not an isolated example, and this sort of thing is not limited to tennis, of course. Athletes in various sports have discussed their own experiences, including Olympians Michael Phelps and Gracie Gold, the NFL’s Dak Prescott, the NBA’s Kevin Love and NASCAR’s Bubba Wallace.

“We’ve been talking about this forever,” said Becky Ahlgren Bedics, vice president of mental health and wellness for the WTA, the women’s tennis tour. “Any time an athlete shares with us, or shares with the world, their experience, we can learn something from it, especially if we’re listening. And we certainly are listening.”

At Wimbledon, and most tournaments, the WTA provides an on-site clinician so players can request 30- or 60-minute sessions. Also offered any day, any time: video or phone conversations.

The WTA’s all-around wellness program started in the 1990s, focused on prevention, education and awareness of services.

“They are very much utilized by our athletes — across rankings, even,” Ahlgren Bedics said. “Who is more likely to use it? We have athletes who are just fresh to the tour as well as ones who have been around and are more of our veterans.”

(Last year, the ATP men’s tour announced a partnership with a company offering access to therapists. Fish’s reply when asked whether the ATP had such support systems when he played: “No. There were none.”)

Some players travel with their own mental coach. Others speak regularly or occasionally with one.

Still others say they seek out a conversation with someone they know well, such as a coach or a personal trainer.

“I’m somebody who has dealt with anxiety since my father’s passing, to the point where I couldn’t leave the house. I would be playing matches and everything would be spinning out of control. … My mom and people around me pleaded with me to get help. But I was the guy who says, ‘Eh, whatever. It’s just fine. Yada yada yada.’ But I got help,” said Steve Johnson, a 31-year-old from California who was the 2011-12 NCAA singles champion for USC and has been ranked 21st. “I talk to a therapist quite frequently. It’s not weakness. You have no idea what somebody is going through unless you ask them.”

Whether the concerns are personal or professional, they exist, as in any walk of life.

“There’s a lot of pressure. I felt it when I was No. 20 in the world. I felt it when I broke my ankle and came back and I had (ranking) points to defend and people expected me to have the same results as before and I wasn’t,” said Mihaela Buzarnescu, a 33-year-old player from Romania who has a Ph.D. “I was depressed. When … my ranking went in one week from 55 to 135, I wasn’t able to go out of the hotel room for a couple of days.”

Buzarnescu said the pandemic has been particularly hard because of the lack of fans — they were banned at last year’s U.S. Open; Wimbledon only allowed full capacity at some courts in Week 2 — and restrictions on players’ movements.

Jamie Murray, a 35-year-old from Scotland with five Grand Slam titles in men’s or mixed doubles and older brother of three-time major champion Andy, says that’s worn on him.

“We’ve basically just gone from bubble to bubble to bubble, all around the world. And there’s no getting away from tennis. You play a match, let’s say your lose — it’s all harder when you’re losing — you go back to the hotel. Small hotel room, four walls. Sometimes you don’t have fresh air, because you can’t open your windows. And you’re just sitting there. And the match is just here, like this,” Murray said, his hand in front of his face. “And it’s played over and over and over in your mind. And you can’t get away from it. There’s no escape. You can’t go out for dinner with your friends.”

During Wimbledon, all players stayed in one hotel, instead of being able to rent private houses to stay with family or friends. British players could not stay at home. No one can leave the hotel at all, other than to travel to the tournament site.

“It has been difficult for them for the last year, functioning in those environments,” All England Club chief executive Sally Bolton acknowledged.

In Paris, players were allowed one hour of free time per day. At the Australian Open in February, players couldn’t leave their hotel rooms at all for two weeks if someone on their flight tested positive for COVID-19.

“This is a fragile time in everyone’s life. This bubble stuff — you can’t factor in how much it weighs on each person,” said Reilly Opelka, a 23-year-old who is the highest-ranked U.S. man. “When you’re in a bad frame of mind, it can get dark and it’s scary. It really is. It’s scary.” 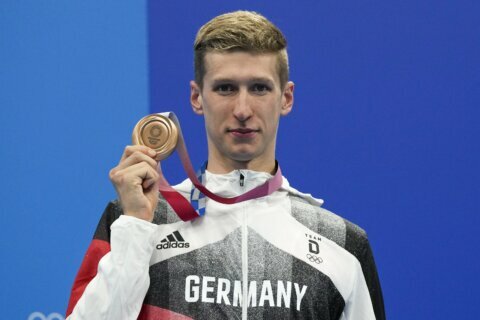 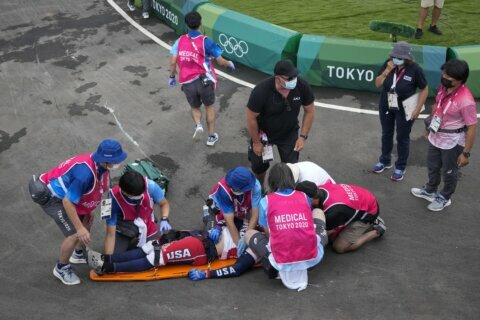 US BMX rider Fields released from Tokyo hospital after crash