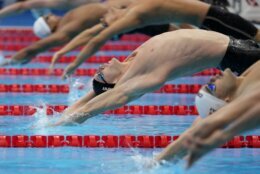 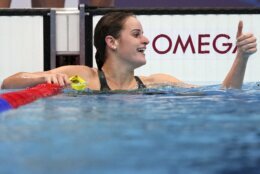 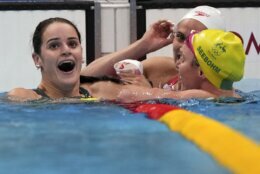 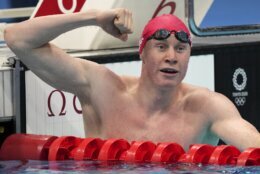 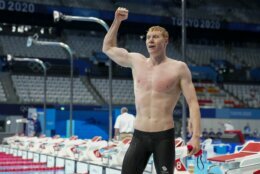 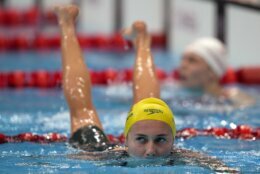 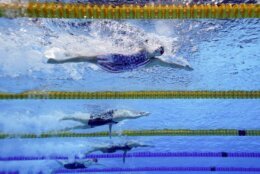 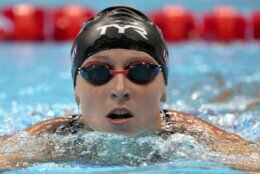 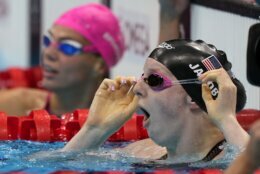 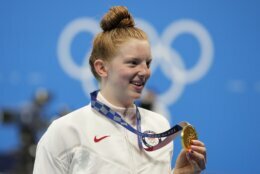 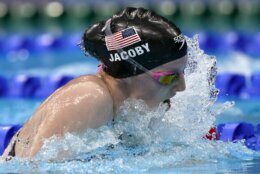 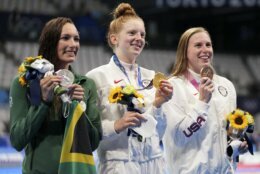 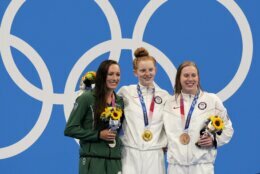 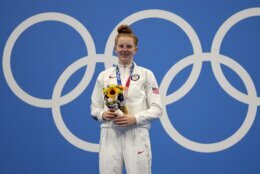 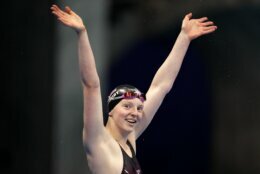 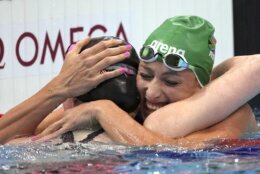 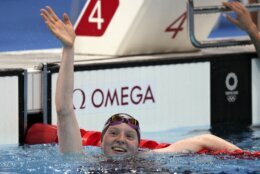 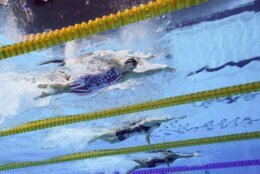 TOKYO (AP) — Alaska is renowned for its majestic natural beauty. The snowy peaks. The glistening glaciers. The sparkling fjords.

An Arctic paradise, for sure.

That’s never been much of a thing in the 49th U.S. state. Until now.

Alaska — of all places — has a champion at the pool.

“I was definitely racing for a medal. I knew I had it in me,” said Jacoby, who hails from Seward (population: 2,733). “I wasn’t really expecting a gold medal, so when I looked up and saw the scoreboard it was insane.”

Only a handful of Alaska swimmers had even qualified for the U.S. Olympic trials. Jacoby was the first to ever make the team.

When she touched the wall first, it set off a giddy celebration back home.

“A lot of big-name swimmers come from big, powerhouse clubs,” Jacoby said. “Me coming from a small club, in a state with such a small population, really shows everyone that you can do it no matter where you’re from.”

Jacoby’s winning time was 1 minute, 4.95 seconds. Tatjana Schoenmaker of South Africa claimed the silver in 1:05.22, while King gave the Americans another medal by taking the bronze in 1:05.54.

Jacoby’s shocking win salvaged what had been a bit of a disappointing morning for the Americans.

Britain went 1-2 in the men’s 200 freestyle. Russia did the same in the men’s 100 backstroke. And the Australian women claimed their second gold of the Tokyo Games.

Through the first three finals, the U.S. had only managed a pair of bronze medals, losing a men’s backstroke race at the Olympics for the first time since 1992.

Then the high schooler came through.

Jacoby was third at the turn, trailing Schoenmaker and King. But, with her head bobbing furiously out of the water, the teenager surged past King and glided to the wall just ahead of the South African.

Looking at the scoreboard with a bit of disbelief, Schoenmaker reached across the lane rope for a hug when the enormity of her accomplishment finally hit. Then it was King bounding over from two lanes away to congratulate America’s new breaststroke queen.

“I’m so excited for Lydia,” King said. “I love to see the future of American breaststroke coming up like this and to have somebody to go at it head-to-head in the country. I definitely knew she was a threat and saw a lot of myself in her effort.”

Jacoby’s unique journey has also added a bit of intrigue to a swimmer who is heading into her senior year of high school in one of her country’s most remote outposts.

That’s a bit of a stretch, of course, but Jacoby did had to deal with her local pool closing during the COVID-19 pandemic, forcing her to train about 2 1/2 hours away in the state’s biggest city, Anchorage.

Jacoby never let the hardships get her down.

“She’s so sweet. She’s just a ray of sunshine,” American backstroker Regan Smith said. “I had a ton of confidence in her, absolutely.”

The U.S. men have always had plenty of confidence in the backstroke, but one of the sport’s longest streaks finally ended Tuesday.

Russian swimmers swept the top two spots in the 100-meter back, with Evgeny Rylov claiming the gold medal in 51.98 and teammate Kliment Kolesnikov taking the silver in 52.00.

Defending Olympic champion Ryan Murphy settled for the bronze in 52.19.

Amazingly, it was the first backstroke defeat for the U.S. men at the Olympics since the 1992 Barcelona Games.

They won 12 straight golds over the last six Olympics, including Murphy’s sweep of the 100 and 200 back at the 2016 Rio de Janeiro Games.

“Winning an Olympic gold medal means you’re the best in the world,” Murphy said. “Being third in the world is no slouch.”

World record-holder Kaylee McKeown gave the Aussie women another gold medal with a victory in the women’s 100 backstroke, setting an Olympic record.

Her winning time of 57.47 was just off the world mark she set this year of 57.45. The silver went to Canadian Kylie Masse in 57.72, while former world record-holder Smith was relegated to bronze at 58.05.

Coming into these Olympics, Australia had not won an individual women’s title since 2008. They’ve already got two in Tokyo — plus a relay gold — with McKeown’s victory coming after Ariarne Titmus’ triumph Monday in the 400 freestyle.

“My legs were definitely hurting with the last 20 to go,” McKeown said. “But you know I’ve trained for that and I knew I had a really strong backend and a really good chance to be on the podium.”

Britain’s sweep in the 200 free was led by Tom Dean capturing the gold in 1 minute, 44.22 seconds, while teammate Duncan Scott picked up the silver at 1:44.26. The bronze went to Brazilian Fernando Scheffer in 1:44.66.

Dean’s victory was even more remarkable considering he has twice had COVID-19 during the buildup to the Games.

“It was quite tough,” he said. ”It was tough having a lot of time out the water. And obviously it requires a slow buildup because of the nature of the disease. So it’s tough and it was a very bumpy ride this season.”

He didn’t have to worry about defending champion Sun Yang, who was banned from the Tokyo Olympics for a doping violation.

Titmus and Katie Ledecky both advanced to Wednesday’s final of the 200 freestyle, setting up another showdown after their thrilling race in the 400 where the Terminator rallied for the victory with a blazing final lap.

Titmus was the top qualifier in the semis at 1:54.82, while Ledecky — the defending Olympic champion — cruised to the third-best time of 1:55.34.

Ledecky had a relatively easy day compared with Monday, when she raced three times for a total of 2,100 meters.

She’ll have another big morning Wednesday, when she competes in the finals of the 200 free and the 1,500 free — her shortest and longest events — about a hour apart.

“It’ll be a good challenge,” Ledecky said. “It’s been fun to train for both of them.”