LAUSANNE, Switzerland (AP) — Two Russian swimmers who were provisionally suspended by FINA for doping violations have been cleared to compete in the Tokyo Olympics.

The world governing body had taken action recently against Alexandr Kudashev and Veronika Andrusenko because of evidence from the World Anti-Doping Agency’s investigation of the former Moscow anti-doping lab’s data. But the Court of Arbitration for Sport on Sunday cleared both swimmers, according to FINA.

Evidence packages had not previously been provided against the swimmers when WADA prosecuted the strongest cases resulting from its probe into doping in Russia, but WADA brought the information to FINA’s attention, the swimming body said.

“We were duty-bound to follow up quickly and carefully on the material provided,” new FINA president Husain Al-Musallam said in a statement. “We will both respect and implement CAS’s decision.”

Kudashev and Andrusenko will swim for the Russian Olympic Committee. Russia is barred from competing as a country in Tokyo because of ongoing doping issues found by WADA.

Andrusenko will be competing in her third Olympics. Kudashev will swim in his first Games. 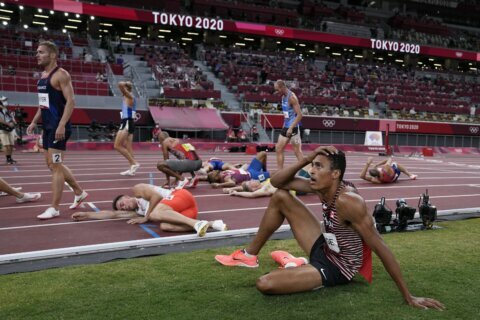